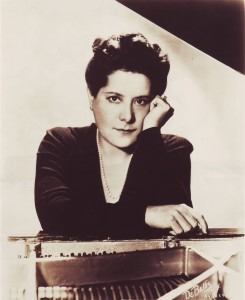 Brazilian pianist Guiomar Novaes (1895-1979) entered the Paris Conservatoire in 1909 at age 14 and instantly caught the attention of Debussy, who had been on her entrance jury. Even by that young age, she had already made fundamental decisions about musical interpretation. Her teacher at the Conservatoire, Isidor Philipp, found it difficult to persuade her to change her interpretations of things such as tempo once she had made up her mind. By 1910, she was already on the concert stage, performing in Paris, London, and on tour in Italy, Switzerland, and Germany and she was only 19 when she made her New York debut at Aeolian Hall. Her final appearance in New York was nearly 60 years later, with a concert in 1972.

She began with a large repertoire and gradually narrowed it, becoming most famous for her Chopin interpretations. Her performances were noted for their singing lines – even in this performance of the Funeral March from Chopin’s Second Piano Sonata, this aspect comes through clearly.

Chopin: Piano Sonata No. 2 in B-Flat Minor, Op. 35: III. Marche funebre: Lento (Guiomar Novaes, piano)
In playing other Romantic composers, this twentieth-century performer was noted for sounding like pianists from an earlier generation. Her relaxed and natural approach made the pure beauty of the melodies almost a novelty in an age of intellectual and muscular pianism.

Beethoven: Piano Sonata No. 26 in E-Flat Major, Op. 81a, “Les adieux”: II. Abwesenheit: Andante espressivo – III. Das Wiedersehn: Vivacissimamente (Guiomar Novaes, piano)
Even when going back to earlier composers such as Mozart, her ease in playing makes them a delight to hear. Even when hearing this familiar Mozart melody, her command of the subtle details often makes us hear the music in a different way than before.

Mozart: Piano Sonata No. 11 in A Major, K. 331: III. Alla turca: Allegretto (Guiomar Novaes, piano)
Her long international career and her utter mastery of the piano repertoire made Guiomar Novaes one of the great pianists of the 20th century, and with a very different sound than the Russian pianists who largely dominated the keyboard scene.