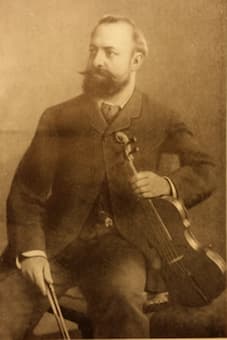 He was born in 1845 in Vezprém, Hungary, and in the 85 years of his life, was one of the most important violin teachers of the late 19th and early 20th century. He taught at the St. Petersburg Conservatory for 49 years (1868-1917) and after his move to the US in 1917, he taught at the Institute of Musical Art (later known as the Juilliard School) from 1923. In 1928, he joined the faculty of the Curtis Institute of Music in Philadelphia.

Leopold Auer (1845-1930) was the teacher of some of the notable violin virtuosos of the turn of the century, including Mischa Elman, Jascha Heifetz, Nathan Milstein, Toscha Seidel, and Efrem Zimbalist. Many of his students started their careers in Russia and then continued them in the US, bringing Russia’s musical heritage to the world.


In 1908, in honor of Auer’s 40 years as a teacher, the Conservatory founded a competition in his name, which was finally realized in 1911, financed by the Tsar and friends of the Conservatory. The winner in 1911 was Mishel Piastro, a Leopold Auer student who went on to become the concert master and solo violinist for the New York Philharmonic. Auer had also taught Piastro’s father, Boris, and his brother, Josef. This, unfortunately, was the first and only competition; it was never held again. 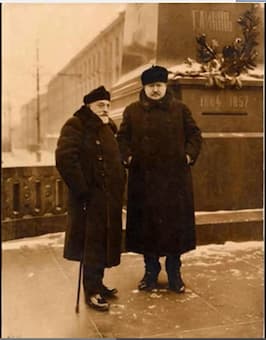 In 2013, the first violinist for the St. Petersburg String Quartet, Alla Aranovskaya, decided to revive the Leopold Auer Competition The first step was to contact Leopold Auer’s heirs to see if they would agree to the use of his name. She found one great granddaughter in Alabama and another in Paris. They contacted the rest of the family and agreed to Aranovskaya’s proposal. Various Auer connections began to appear. The research Marina Akimova discovered a trove of 1,500 letters written by Auer’s first wife, Nadine Pelikan, to a friend that gave many hitherto unknown details about the great violinist. After Auer’s death, his second wife, Wanda Bogutska Stein, was forced to sell his violins and other things to support herself and one of those items was a violin bow made by the famed Russian maker Nikolai Kittel (1805-1868). It had been a gift to Auer from Jascha Heifeitz. The purchaser showed the bow to Aranovskaya when she was on tour and she immediately recognized its quality – she said that playing on it made the bow feel like an extension of her arm and playing was effortless. She was able to buy the bow 10 years later, half a year before the original purchaser died. When she located Auer’s grave in the Ferncliff Cemetery in Hartsdale, NY, she brought the bow there to play.


Alla Aranovskaya noted that, in St. Petersburg, Leopold Auer’s name had vanished from the musical record. She said that she was fortunate to be able to study and teach at the St. Petersburg Conservatory in classroom N 25 where Auer used to teach. She went on to say ‘…and I can tell you that spirit of Leopold was there!’ There was a photograph of Auer in the room and she said the eyes followed you around the room. Although he taught at the St. Petersburg Conservatory for nearly 50 years, his departure for the US while he was on a concert tour in 1917 still did not sit well.


In bringing back the competition in 2014, she faced a number of challenges, some stemming from this resentment of Auer in St. Petersburg. Nonetheless, she received over 70 applications for the competition and the winner was a 14-year-old South Korean, Donghyun Kim. The competition was held the same month as the original Auer competition had been held 103 years earlier – in early October. That schedule still holds true for the 8th annual competition, to be held 1-9 October 2022. This year, however, because of the COVID-related travel difficulties, competitors will be able to compete live even if not in person. The distant competitors will be assigned a time to perform live from their home countries and be seen by the jury on a live feed. See the Leopold Auer Society website for more details.

Bringing such an influential musician and educator back to live has been a work of joy for Alla Aranovskaya. Videos of the 2014 competition, the 2015 competition and other are available online.