Composers Inspiration
A Hymn to the Sun
by Maureen Buja November 9th, 2015 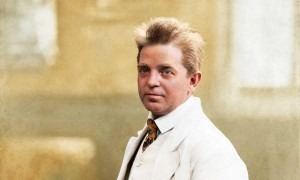 What do you do if you’re stuck in the frozen north and are looking longingly at the sunny south where your wife is working? Well, you take a holiday and then, if you’re a composer, you write something that brings the sun home with you. And this is what composer Carl Nielsen did in 1902.

Grieg’s wife, the sculptor Anne Marie Carl-Nielsen, was in Athens making copies of the bas-reliefs and statues in the Acropolis Museum. Nielsen, with commission funding from the publisher Wilhelm Hansen, joined her in Athens and a local conservatory gave him access to a study room with a piano. His own interests in archaeology often took him out to the surrounding countryside and it was during his time in the mountains around the area that inspired his Helios Overture. 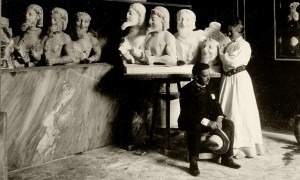 Nielsen: Helios Overture (South Jutland Symphony Orchestra; Niklas Willen, cond.)
Begun in March 1902 and finished in April 1903, this concert overture takes the rise and fall of the sun over the Aegean Sea as its inspiration. As the strings become the undulating sea, the horns become the sound of the rising sun, while the string and woodwinds add a richness and shine to its appearance. You can almost hear the rising brightness as the world emerges from the darkness of night.

Once the sun appears, all is calm and clean. A fanfare in the trumpets seems to herald the start of the business day and all begins to get busier. The woodwinds take up a simple theme, the strings add pizzicato to make it bustle. Another fanfare might be an important arrival or it might be the light of the sun illuminating an important building – it’s all how you imagine the day progressing. The day gets busier and busier, the trumpets remain busy announcing new arrivals, and then the day closes. The music subsides and we feel the approach of the same darkness that exited at the beginning of the piece.

Anne Marie Brodersen (1863-1945) was one of the first women to be taken seriously as a sculptor. She met Carl Nielsen in Paris in 1891 and they married in Florence. Anne Marie took as her family name the full name of her husband, with a hyphen, becoming Anne Marie Carl-Nielsen. In 1903, she was awarded the Anker Scholarship and undertook an extensive journey to Athens and Constantinople. This is when she copied classical Greek sculpture while Carl Nielsen composed music about the sun. Her work often took her travelling around the world while her husband remained home to keep the family together. Her portrait bust of him won the Thorvaldsen medal in 1922. 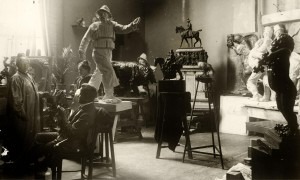 Anne Marie and Carl in her studio

Carl Nielsen (1865-1931), considered Denmark’s greatest composer, also had a 16-year stint in the Royal Danish Orchestra as 2nd violinist. His early music was inspired by German and Norwegian composers such as Brahms and Grieg, but he soon developed his own sound and style. His progressive tonality and new ideas of composition removed him from the normal repertoire and it wasn’t until the 1960s, championed by conductors such as Leonard Bernstein, that the rest of the world could catch up with him.

The Helios Overture, one of Nielsen’s wonderful small orchestral works, remains popular even now and is a wonderful evocation of the warmth of the Mediterranean and the centrality of the sun to its mythology.