Artists Behind the scenes
The bits you don’t see… backstage at concerts and competitions
by Oliver Pashley August 9th, 2014 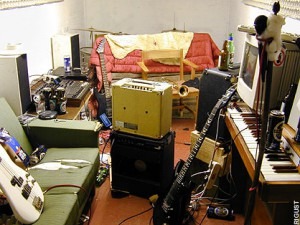 Sitting in a comfortable seat in a concert hall, watching the soloist striding out confidently, you relax knowing that the performer arrived in good time, had ample rehearsal, and a quiet place to rest beforehand in order to be in the position to give their best on stage. But sometimes the conditions are far from optimal…

It’s important to remember that everyone prepares differently for a performance. Some people don’t mind the company of others, while others prefer to be alone. And we should always assume the latter, giving someone the option of talking to others if they so wish, but also letting them do their own thing if that’s what they prefer. Sometimes nothing can be more off-putting than an overenthusiastic colleague waxing lyrical about their recent caravanning holiday moments before you have to perform Brahms.

Often the venue works against you more than the people. Churches are great venues in that they provide us a space in which to run recital programmes, air out new repertoire, and gain performance experience in an often informal setting. However, churches offer more challenges than any other venue. They are cold, boomy, often with pianos that haven’t been tuned since the 1954 village festival… the list goes on. The layout of some buildings makes warming up impossible, in addition to the absence of a backstage area that really is backstage. Once I saw a poor pianist having to stand behind a curtain on the stage for ten minutes before she performed! Apart from it looking fairly awkward, the extra pressure this creates can often throw you off at the most crucial time.

The life of a musician is far from glamorous, but you feel like you have to draw the line when you can’t just relax somewhere that isn’t standing in full view of everyone as if you’re participating in some perverse nerve-endurance game show. Athletes, actors, and public speakers would never dream of sitting in a dressing room with a large perspex window through which fans can gape and point – why should musicians? 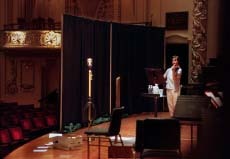 These similar circumstances can also be found at competitions, where arguably it’s more important that the performers feel calm and rested. The recent scandal at an international conducting competition in Cordoba, Spain, revealed some of the, erm, ‘idiosyncrasies’ often found at such events. There was no warm up room here either, the only difference being instead of a small church hall, the venue for the competition was the Cordoba Conservatoire; all the practice room doors were locked. There was no-one on the panel apart from the principal conductor of the Cordoba Orchestra, who made decisions sporadically and quickly, taking 3 hours 45 minutes to finish a process that, according to the regulations, should have taken six. And did I mention there was an entry fee of over €700 (£550, $950) per competitor?

Often, competitions have large panels to neutralise any potential nepotism, but it’s very rarely completely free of bias. Some competitions don’t allow students of judges to enter, but again, this is down to the discretion of the management of each individual competition.

Similarly, with auditions, external factors can often influence matters uncomfortably strongly. In the USA, the majority of orchestral auditions are done behind a screen, to add an extra degree of impartiality. In the UK and on the continent this can vary. Clearly, much freelance work is given on the basis of reputation, and I’m not suggesting that the whole of the music world is devilish and corrupt. It can just be unnerving to think that preconceptions sometimes have the power to take you further than your performance itself.

I’m sure everyone has their own horror stories about bad backstage experiences, and unfortunately this is part and parcel of performance. We often are powerless to change the circumstances, so we have to learn to work with them, not against them, which admittedly can be hard upon hearing the phrase ‘You don’t mind if I keep my cat in here with you, do you?’ Deep breaths, deep breaths…