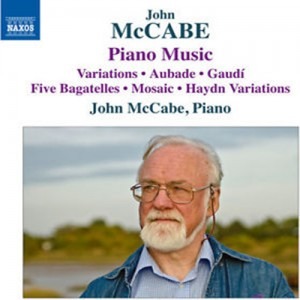 John McCabe was a composer-pianist who excelled internationally in both fields. For his own instrument he wrote a distinguished series of works in which variation form is a recurrent feature. Seventeen years separate the Variations,Op. 22, described by John Ogdon as standing “closer to Rachmaninov’s use of variation technique than to Brahms’s”, and the masterly, unorthodox and original Haydn Variations, McCabe’s longest solo piano work. The evocative Bagatelles and Studies are notable for their unceasing exploration of pianistic and compositional techniques.