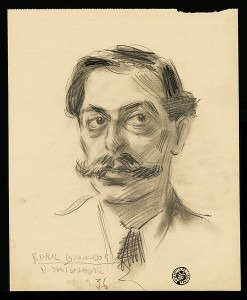 Composers working at the turn of the 20th-century are frequently categorized as nationalists. And Spain produced three prominent composers that seemingly fit this narrow description. Isaac Albéniz composed vibrant piano works of Lisztian difficulty and Iberian color, while Manuel de Falla’s gypsy dramas turned the piano or orchestra into a gigantic flamenco guitar. And then there is Enrique Granados, primarily known for his early12 Danzas españolas and his late Goyescas. However, between these distinctive ethnic markers are a number of highly imaginative compositions that more closely adhere to a cosmopolitan tradition. The Valses poéticos, for example, were originally part of a larger solo-piano collection titled “Cartas de amor” (Love Letters). Composed during his stay in Paris in 1887, Granados later extracted seven of these waltzes, added an introduction and finale and simply retitled the work. True piano miniatures in the style of Robert Schuman, this work bears the unmistakable influences of Chopin and of Schubert. Although Granados did not play the guitar, you are very likely to hear this composition in a number of transcriptions for the guitar, apparently to make them sound “more Spanish.”

Following his years of study in Paris, Granados returned to Barcelona and established his professional career by performing, composing and teaching. The Piano Trio, Op 50, never claimed to be a score of great consequence. There are touches of salon music of the day, as well as idiomatic melodic turns. Nevertheless, the work is steeped in the highly expressive style of Neo-romanticism rather than emerging from a Hispanic folk tradition. Reminiscent of Grieg in the outer movements, the emotional core is distinctly found in the intimate and sentimental “Duetto.”

Enrique Granados: Piano Trio, Op. 50
María del Carmen emerged during an important time in Catalan culture. Barcelona and surrounding areas were in cultural ferment, as a number of modernist societies emerged to cultivate and promote Catalan folk music. Looking to distance itself from the decadence of the Kingdom of Spain, which was in the process of loosing its Philippine and Cuban colonies, modernism crystallized the ideals of the “Renaixença.” To some extent, Granados participated in this modernist movement by using a libretto by Barcelona playwright José Feliu i Codina and placing the action in the Catalonian region of Murica. The plot involves a love triangle between Maria and her two suitors, the peasant farmer Pencho, and his wealthy rival, Javier. Yet musically, the opera closely follows Wagnerian guidelines. With its absence of conventional divisions between arias and dialogue and the importance given to the orchestra, critics endlessly debated whether Granados should be considered a Spanish or Catalan composer. Be that as it may, Granados considered María del Carmen his best opera.

Enrique Granados: María del Carmen, “Act 1”
Cant de les estrelles premiered on 11 March 1911, the same night that also saw the first performances of the Goyescas piano suite and Azulejos. Scored for piano solo, organ and two choruses, the work was immediately recognized as one of Granados’s finest compositions. Written in Neo-romantic style and sporting post-Wagnerian harmonies, it is essentially a virtuoso piano concerto with chorus and organ rather than an orchestra. Subtitled “Poem for piano, organ and voice” it was apparently inspired by Heinrich Heine. However, the Catalan text is not a translation of a Heine poem but an emotional response to Heine’s poems dealing with love and the stars, written from the point of view of the stars. For some reason, Granados did not publish the score and it took almost hundred years of extended family/publisher squabbles before this work was finally able to reach the public.