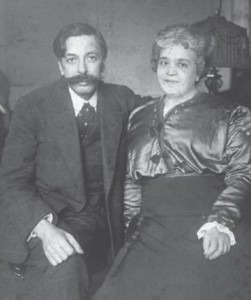 When pianist Enrique Granados (1867-1916) first appeared on stage on 20 April 1890, critics were simply ecstatic! “Granados will be one of the great artists who always seek applause in pure art, without flashiness and cheap concessions.” Praising the young pianist for his delicate touch, full of delicious smoothness, one critic wrote, “He has total technical command, lack of ostentation, and exquisite refinement in programming and interpretation.” In concert after concert he was praised as “a paragon of elegance and sentiment. Without the gymnastic exertions adopted by some performers who seek to attract attention to themselves, he draws from the piano the sounds that suit his fancy, aided by a mechanism that allows him to do anything.” Yet, his highly promising pianistic career would come to a sudden halt. You would be wrong to think that he had a dreadful accident or break any of his fingers. Fact is, he got married and for two and a half years devoted himself almost exclusively to his young family!

Enrique Granados: Piano Quintet in G minor, Op. 49
It all got started during a concert trip to Valencia, at some point in 1891. Granados stayed with wealthy friends of his father, who lived in a converted monastery surrounded by forests and lavish gardens. Festivities and extravagant parties were commonplace, and Granados happily entertained the guests at the piano. During one such party, the young pianist made the acquaintance of the Valencian businessman Francisco Gal y Sabater and his wife Francisca. In addition, he also met their delightful daughter Maria de los Desamparados Gal y Lloveras, nicknamed Amparo. Amorous sparks began to fly, and Enrique and Amparo quickly developed a mutual attraction. However, all too soon Enrique had pressing engagements that forced him to return to Barcelona. This might have been the end of the budding relationship, but as luck would have it, Francisco’s business ran into trouble and he relocated his family to Barcelona. Enrique and Amparo were reunited, and after a brief but intense courtship, he proposed.

However, before they could step in front of the altar, some serious obstacles of a social nature had to be overcome. Enrique’s mother wrote to Amparo’s mother. “As one mother to another, I must speak with complete honesty. My son is poor, very poor. For now, he has nothing more than a good name. I have no doubt that over time he will be successful, but that will not just happen, and the struggle will be difficult. I agree to their marriage with all my best wishes. My first embrace is for my new daughter…I am most grateful to you all for the affection you have shown my Enrique.” With maternal diplomacy smoothing the way, the happy wedding took place on 7 December 1892 in the Romanesque church of San Pedro de las puellas.

Biographers described their union in glowing terms. “Amparo was an ideal spouse; sweetness and femininity were the essence of her being. She was friendly, simple, organized, and completely faithful to her spouse, whom she loved and admired as the most exceptional man in the world.” Reality might have been somewhat less idealized as Amparo raised six children under constant financial pressure. She endured the frequent absences of her husband, who by many accounts, was often in a distracted state even at home. Amapro also knew that her husband had a decided weakness for his young female students, who would have loved to take her place. Yet in his letters to Amparo, Enrique reveals his intense adoration. “Beloved heaven of my soul, I love you with all my soul, life of my life…Do you remember me all the time as I remember you? I am awaiting the happiness of receiving a letter from you, love. I will devour it with my eyes and with my heart. I am realizing more and more how happy I am by your side. I think of my heaven a lot, and I think that I love you more than my own life.“ At this time, Enrique could not have known how prophetic his words would turn out to be; the couple perished in the English Channel when their vessel was torpedoed by a German U-boat! I tell you more about these tragic events in our next episode.