Composers Anecdotes
Drink some champagne and call me in the morning!
by Georg Predota October 16th, 2014 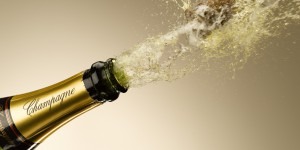 On 7 May 1896, Johannes Brahms celebrated his 63rd birthday. Supposedly he opened the festivities by declaring, “If there is anyone here I have not yet offended, I apologize.” Always known for his crusty personality and rustic mannerisms, Brahms was famous for hiding his real emotions and feelings behind a rather spiky exterior. So we might rightfully ask what was actually bothering him around his birthday celebration? Maybe his real state of mind is disclosed by another statement he made during that party. He explained, “One should have a physical examination once a year. I never was ill during my life, but when one ages, one never knows what’s going on.” Did Brahms already experience some physical discomforts or pain, or was it simply a premonition of things to come?

Death was certainly on his mind, as his dear friend Clara Schumann had suffered a stroke on 26 March 1896 and was not expected to recover. Brahms, who considered Clara to be the “greatest wealth” in his life, was devastated. Trying to cope with her imminent death, he compiled four texts from the bible and completed his Vier ernste Gesänge (Four Serious Songs), Op. 121 by his birthday on May 7. Gone are all traces of folksong influence, and these work adopt a rather harsh and dramatic quality. For Brahms, these songs were of great personal importance, and he vehemently refused to have them performed. But it seems that Brahms was not feeling well himself. 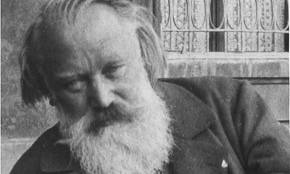 Merely weeks after his birthday, Brahms started to show a yellowish pigmentation of the skin, known as jaundice in medical terminology. He also progressively started to loose weight. His housekeeper Frau Truxa, unbeknownst to Brahms, refitted all his clothes. Brahms pretended not to notice, and told himself that he indeed had regained some weight. However, there was no denying that Brahms was seriously ill. Richard Specht, a close personal friend was shocked to find Brahms in a rather sorry state. “When I saw him this time, I could hardly keep myself from expressing the horror of it. I could hardly recognize him; I have never seen anyone fall apart so rapidly. His mighty figure had shrunk to senility, his face yellow-brown, his skin leather-like, his wonderfully blue shining eyes dull and quince-yellow, his hair sparse and dry, his hands chilly and woody-hard.”

Although Brahms counted a number of physicians as friends, everybody avoided the subject of his deteriorating appearance. Unofficially, it was suspected that he suffered from carcinoma of the pancreas, and that there was no cure. However, he never received an official examination or diagnosis. And he certainly received no treatment, which he would not have followed anyway. But they did council him to stop drinking coffee and cognac. Brahms’s solution was to nick “a glass of tea” from whoever sat next to him in the pub. Brahms was never a serious drunk, but he did consume rather substantial quantities of alcohol during his life. Since he had trouble sleeping, his doctors and friends ordered him to drink half a bottle of champagne before going to bed. As far as we know, Brahms followed that suggestion with all due diligence.

His weight loss accelerated and 6 weeks before his death “Brahms developed distorted facial features, an immobile eye, and dysphasia for a few days, associated with weakness that prevented him from taking his usual walks.” He was last seen in public on 3 March 1897 during a performance of his fourth symphony conducted by Hans Richter. Brahms’s condition deteriorated rapidly, and he passed away on 3 April 1897. A funeral procession and burial ceremony was held three days later—with most of Vienna in attendance—and the composer was laid to rest in the Zentralfriedhof (Central Cemetery) in Vienna.