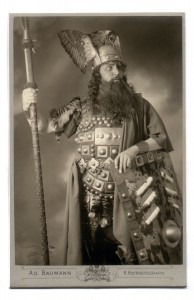 Das Rheingold is a tale of greed and gold, unfulfilled promises and threats of destruction, culminating in a grand vision of Valhalla, somewhat tainted by how it was achieved. Over all hangs the ring and its destructive curse. In early western productions, the story was set in some kind of medieval past, with armor and horned helmets.

In modern productions, the story often takes on the elements of modern war with the use of military uniforms, or takes on a modern setting with the Rhine maidens trudging alongside their terribly polluted river, and so on. 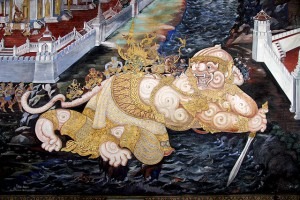 Mural from the Golden Palace, Bangkok

In the Thai production, the director, Somtow Sucharitkul, moved it very far into the past – into the Golden Age of Thailand, before they interacted with the west and were a complete and powerful kingdom unto themselves. This is a mythical Thai past that can be seen reflected in the murals on the walls of the Wat Phra Kaew at the Grand Palace in Bangkok. These murals, about 2 kilometres in total length, depict scenes from the Thai national epic, the Ramakian, based on the Indian epic the Ramayana. 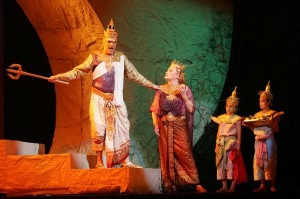 Wotan, Fricka, and servants, one holding the Apples of Immortality

As you can see from this production image, Wotan and Fricka are in traditional Thai clothing as worn by royalty – from their gold crowns down to their clothing. Lars Waage as Wotan and Barbara Smith Jones carry the authority of their crowns and give us an idea that this will be a different kind of opera. 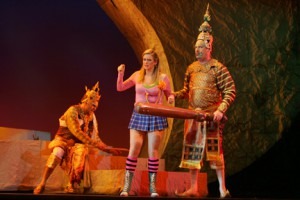 Freia with a giant, Wotan in the background

Once Wotan’s daughter is taken, however, the costumes change to distinctly western garb: Fricka in an evening gown, Loge in a Hawaiian shirt and Freia in a combination of high school flirt and girl with bad taste (note the striped knee-highs and her sneaker boots).

When Wotan (still in kingly garb) and Loge in his Hawaiian shirt descend to Nibelheim, one thing was immediately impressive: all the Nibelungs were played by children. This made Alberich (sung by Colin Morris) , dominating over them in gold rainiment (ok, a gold raincoat) even more frightening. He might be a dwarf, but he could loom over the little kids.

Later in the scene, when Alberich has been defeated and he summons the Nibelungs to bring out all the gold, it’s not golden armor and weapons as in many western productions. They bring toaster ovens, and oil cans, and an iron…in other words, white goods for home use. 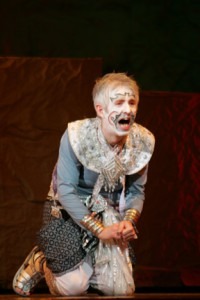 When I asked Somtow, the director, about this, he said that the Nibelungs were all children from the local orphanage and were delighted to be part of the production…and he wanted to make a statement about underage labour in Thailand. This isn’t a common message coming through many western Wagner productions!

Freia’s redeemed, the gold is handed over, and then, as the gods ascend over the rainbow bridge to Valhalla, the golden vision that arises is the skyline of Bangkok. So much of the opera was filled with brief shocks that, at first, caused a laugh, but then was followed by a pause for thought. Taken as a grand metaphor, Somtow was showing in his opera what has been lost by Thailand following the gold and not its own internal strengths. In taking an opera out of its traditional western garb and dressing it in a Thai-Buddhist garment, Somtow was able to make us think a bit more deeply about what Wagner wrote and what can be made of it today.