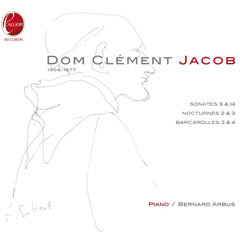 Jacob studied at the Paris Conservatory with Charles Koechlin and André Gedalge; an admirer of Darius Milhaud and Erik Satie, he was a member of the Ecole d’Acueil. In 1929, Jacob converted from Judaism to Catholicism(influenced by Jacques Maritain) and became a Benedictine monk. He would go on to study organ with Maurice Duruflé, as well as Gregorian chant.