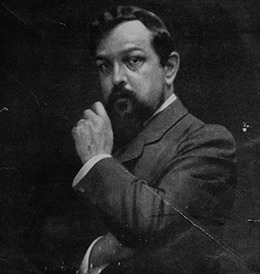 After finally achieving success with his opera ‘Pelléas et Mélisande’ in 1902, Claude Debussy (1862-1918) wrote ‘L’Isle Joyeuse’ (‘The Joyous Island’), while working hard on his new composition, ‘La Mer’. His very successful artistic achievements were in stark opposition to events in his personal life. In the summer of 1904, Debussy had abandoned his wife of five years (who subsequently shot herself) for the singer Emma Bardac, the estranged wife of a wealthy banker. He composed his ‘L’Isle Joyeuse’ while he and Emma spent the summer on the Isle of Jersey off the coast of Normandy. Inspiration for the composition came not only from his stay on the island with Emma, but also from an 18th century painting by Antoine Watteau (1684-1721) ‘L’Embarquement pour Cythère’ (Embarkation or Voyage to Cythera), of which two different versions exist – one in the Old Masters collections in Berlin, the other one in the Louvre in Paris.

L’isle joyeuse
Cythera is a Greek island in the Mediterranean which, according to Greek mythology, is the island of Aphrodite, goddess of sensual and erotic love. The Berlin version of Watteau’s painting shows a statue of Aphrodite on a pedestal placed against a dark landscape of lush trees looking down on Cupid, a quiver of arrows in her hand. A multitude of couples are surrounded by putti, some below the statue, others moving seemingly toward a ship, the existence of which is only implied by its furled sails in the background. The dark trees on the right contrast with the ethereal lit background where the ship is moored — we cannot see beyond it. The question is whether the couples are leaving the island of Cythera or whether they are leaving the mainland for the island of Aphrodite – Watteau leaves the interpretation open for the viewer.

In the Louvre (Paris) version we see a similar setting — the statue of Aphrodite on the right with a group of couples (lovers) in Rococo dress seemingly leaving for something, putti flying above them — no ship can be detected in the background, which shows a body of water and a somewhat fantastic landscape.

Debussy starts his composition of ‘L’Isle Joyeuse’ with a short and lively introduction, ‘Quasi una cadenza’, followed by the theme of dancing rhythms, similar to the movements of the festively attired couples in the paintings — rococo decorations in sight and sound. Debussy moves on to a somewhat ‘rocking’ 3/8 meter which might suggest the movement of ship. He marks this section as ‘undulating and expressive’, accelerating the rhythm and combining it with extraordinary orchestral sonority bringing the composition to a rousing, sonorous conclusion.

The French poet Charles Baudelaire (1821-1867) was also inspired by Watteau’s painting in the Louvre. His poem, bearing the title ‘Un voyage à Cythère’ starts out setting the theme very much in accordance with the images projected by Watteau:

Throughout the early part of the poem, Baudelaire continues to laud the beauty of the island, but then starts to oppose its mythological past with the present, which takes on a much more sinister role:

In the poem’s last strophes, Baudelaire implies that love in general causes moral and physical suffering and that the landscape, though beautiful and charming, only speaks to him of his own torments: 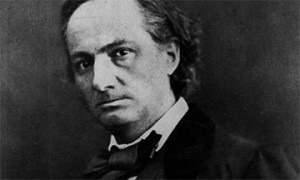 Baudelaire speaks as ‘le poète maudit’ — the cursed poet — modern man — going well beyond the images and ideas that Watteau’s painting implies, and also quite different from Debussy’s situation on an island with his lover. Painting, music and literature can rarely give us a universal answer – they leave it to us to find our own interpretation.