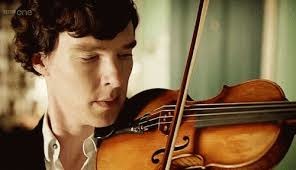 Benedict Cumberbatch as Sherlock
with his violin

We looked earlier at Sherlock and Opera and now, when we see what other music he ventured into, we find a connoisseur of the musical arts of his time at its highest point.

From his very first appearance in A Study in Scarlet (1887), we know of Sherlock’s violin. After he and Watson have been introduced, Sherlock asks Watson about the kinds of things that might come between them as flat mates:

“Do you include violin-playing in your category of rows?” he asked, anxiously.

“It depends on the player,” I answered. “A well-played violin is a treat for the gods—a badly-played one——” 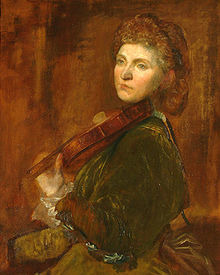 And we learn, gradually, over the course of the story, about Sherlock and how he uses his violin to help him think – and the concessions he makes to Watson’s desire for good playing.

I see that I have alluded above to his powers upon the violin. These were very remarkable, but as eccentric as all his other accomplishments. That he could play pieces, and difficult pieces, I knew well, because at my request he has played me some of Mendelssohn’s Lieder, and other favourites. When left to himself, however, he would seldom produce any music or attempt any recognized air. Leaning back in his arm-chair of an evening, he would close his eyes and scrape carelessly at the fiddle which was thrown across his knee. Sometimes the chords were sonorous and melancholy. Occasionally they were fantastic and cheerful. Clearly they reflected the thoughts which possessed him, but whether the music aided those thoughts, or whether the playing was simply the result of a whim or fancy was more than I could determine. I might have rebelled against these exasperating solos had it not been that he usually terminated them by playing in quick succession a whole series of my favourite airs as a slight compensation for the trial upon my patience. 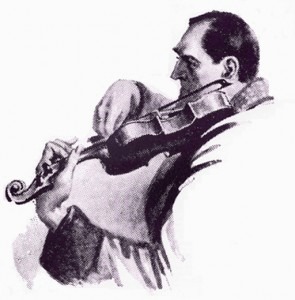 Sherlock and his Violin

After they have viewed the body of the victim in the case, Sherlock has a concert he wants to attend:

We must hurry up, for I want to go to Hallé’s concert to hear Norman Neruda this afternoon.”

He was very late in returning—so late, that I knew that the concert could not have detained him all the time. Dinner was on the table before he appeared.

“It was magnificent,” he said, as he took his seat.

Wilma Neruda was one of the most famous violinists of her time. She studied in Vienna, married the Swedish musician Ludvig Norma and after his death, married the German-English musician Charles Hallé. Hallé founded the Hallé Orchestra in 1858.

In the novel The Sign of the Four (1890), Sherlock faces a particularly difficult puzzle with violin in hand:

He took up his violin from the corner, and as I stretched myself out he began to play some low, dreamy, melodious air,—his own, no doubt, for he had a remarkable gift for improvisation. I have a vague remembrance of his gaunt limbs, his earnest face, and the rise and fall of his bow. Then I seemed to be floated peacefully away upon a soft sea of sound, until I found myself in dream-land, with the sweet face of Mary Morstan looking down upon me.

It was late in the afternoon before I woke, strengthened and refreshed. Sherlock Holmes still sat exactly as I had left him, save that he had laid aside his violin and was deep in a book. He looked across at me, as I stirred, and I noticed that his face was dark and troubled. 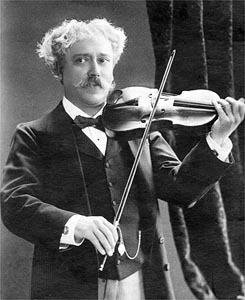 In the short story ‘The Red-Headed League’ (1891), Sherlock has another concert he wants to go to:

Sarasate plays at the St. James’s Hall this afternoon,” he remarked. “What do you think, Watson? Could your patients spare you for a few hours?

A sandwich and a cup of coffee, and then off to violin-land, where all is sweetness and delicacy and harmony, and there are no red-headed clients to vex us with their conundrums.

Pablo Sarasate (1844-1908) was a Spanish violinist and composer, known for his purity of tone and his tremendous technical abilities. In his early career, he was known for his opera fantasies, including the Carmen Fantasy. The playwright and music critic George Bernard Shaw said that he “left criticism gasping miles behind him.”

Sarasate: Carmen Fantasy, Op. 25 (Itzhak Perlman, violin; Royal Philharmonic Orchestra; Lawrence Foster, Conductor)
In the last of the Holmes short stories, “The Adventure of the Retired Colourman” (1926), the duo take a break in the middle of their case by going to a concert:

Well, leave it there, Watson. Let us escape this weary workaday world by the side door of music. Carina sings to-night at the Albert Hall, and we still have time to dress, dine, and enjoy.

Which leaves us with a mystery. Who is “Carina”? Sherlock Holmes specialists from around the world have been unable to find such a singer, and for a singer to appear at the Royal Albert Hall, which has a maximum capacity of over 5,000 seats, means that she would be singer of some fame. Perhaps we need to look to the past to find her. The one woman who defeated Sherlock, Irene Adler, in “A Scandal in Bohemia,”(1891) was in Holmes’ comprehensive notebooks as:

And when he speaks of Irene Adler, or when he refers to her photograph, it is always under the honourable title of the woman.

Could this be who’s singing at Albert hall? If we take the message as a coded reference (as he does in referring to her as The Woman), could “Carina,” Italian for “Beloved” be the reference? We will ignore the fact that she would be nearly 70 years old because we know of the agelessness of all such detective stories!

Mentions of music and of Sherlock’s violin come in many more stories, but in just looking at these few, we can say with some assurance that Sherlock and Watson participated fully in the rich musical life of London – and more than just being inexperienced spectators, they were refined connoisseurs accustomed to the finest music the world had to offer.