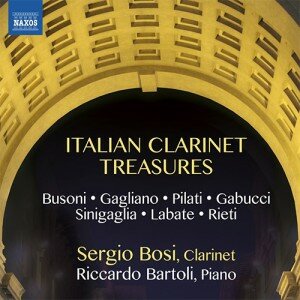 Circumstances including an overwhelming preoccupation with opera at the expense of instrumental music, two world wars and the rise of a Fascist dictatorship, resulted in a generation of Italian chamber music composers born between the 1880s and early 1900s whose music seemed to vanish without trace. Featured on this release, they include virtuoso composer-performers, such as Ferdinando Busoni, father of Ferruccio, renowned pedagogues, and composers persecuted for their Jewish origins. This is Sergio Bosi’s fifth album for Naxos in a series devoted to restoring to the repertoire forgotten and rarely-performed Italian clarinet works from the second half of the 19th century to the present day.