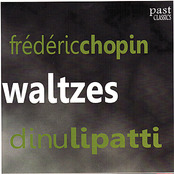 From Waltzes by Chopin (2009)
Released by CreateSpace

This recording was made in 1950, three months before the Romanian pianist Dinu Lipatti died of Hodgkin’s disease at the age of 33.

Lipatti, whether he plays Bach, Mozart or Chopin, is just beautiful. His interpretations are sincere, simple, yet powerful in expression and colour. He defines what music is.

Waltze no.1, Op. 69, also known as L’adieu, was composed when Chopin fell in love with Maria Wodzinska, whose father did not want her to marry a poor young musician.

This melody is full of tenderness, sadness and a kind of languishing despair, and when performed by Lipatti who knew that he was condemned, is utterly heartbreaking.