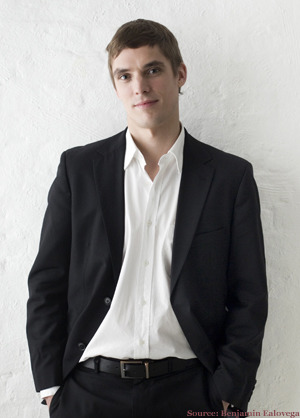 “There was lightness and grandeur, seriousness and fun, powerful momentum and meditative restraint. Tiberghien knew exactly what he wanted to say about the music, and did so with a blend of boldness, reasoning and inspiration.”
The Daily Telegraph, London

“Tiberghien leaps from the ruck of talented young pianists by making the music his own, taking you on to a plane where the interpreter’s craft is fully disposed to communicating the music’s fundamentals.”
The Age, Melbourne

Highlights among Cédric Tiberghien’s solo recitals this season include returns to the Wigmore Hall’s Master Series, a debut at the Theatre des Champs Elysees in Paris, the Asahi Hall in Tokyo, the Schubertiade Schwarzenberg, and the Societa dei Concerti in Milan.

As a concerto soloist, he will appear with the National Symphony Orchestra in Washington, the NHK Symphony Orchestra in Tokyo, the National Symphony of Ireland, BBC National Orchestra of Wales, on tour with the Orchestre Philharmonique de Liege (including Amsterdam’s Concertgebouw and Vienna’s Musikverein), and an extensive Australasia tour with Australia and New Zealand’s leading orchestras. He will also be the focus of residency projects with the Musikkollegium Orchestra in Winterthur and the Gelders Orkest in the Netherlands.

Cédric Tiberghien is also a dedicated chamber musician: during the 2009/10 season he performed the complete cycle of Beethoven’s Violin Sonatas with his duo partner Alina Ibragimova at London’s Wigmore Hall to great acclaim. During the 2010/11 season the duo appear in the Carnegie Hall Debut Series, at the Athens Cultural Centre, at the Concertgebouw Amsterdam and on a major tour of Australia. Their first recording, of the complete works for violin and piano by Szymanowski (2009), and the first volume of the Wigmore Hall Beethoven Cycle (June 2010) both received critical acclaim.

Cédric Tiberghien studied at the Paris Conservatoire with Frédéric Aguessy and Gérard Frémy and was awarded the Premier Prix in 1992, aged just 17. He was then a prizewinner at several major international piano competitions (Bremen, Dublin, Tel Aviv, Geneva, Milan), culminating with the 1st Prize at the prestigious Long-Thibaud Competition in Paris in 1998, alongside with five special awards, including the Audience Award and the Orchestra Award. This propelled on his international career, leading to over 150 engagements worldwide, including 7 visits to Japan and showcase appearances throughout Europe.