Composers Anecdotes
The Cat Piano
(Warning: This Article is rated R)
by Georg Predota May 13th, 2015 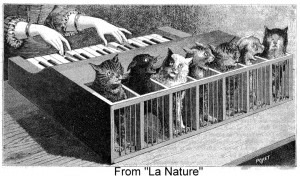 Illustration of a cat-organ,
from La Nature (1883).
Credit: Messy Beast.

From the weird and wacky world of musical instruments comes a story that will make your stomach turn and your blood curdle. Warning, the reading of this article might cause serious discomfort to some sensitive readers. If you are an animal lover, please read no further and close your browser immediately!

Our story originates in the 17th century and was first captured by the Jesuit scholar Athanasius Kircher in his famous 2-volume treatise on music, the Musurgia Universalis, first published in 1650. This seminal work of musicology—richly illustrated with hand-colored illustrations—became enormously influential in the development of Western music. However, it also recorded a rather disturbing story involving a stressed Italian prince, who was in desperate need of amusement. Kircher writes, “In order to raise the spirits of an Italian prince burdened by the cares of his position, a musician created for him a cat piano. The musician selected cats whose natural voices were at different pitches and arranged them in cages side by side, so that when a key on the piano was depressed, a mechanism drove a sharp spike into the appropriate cat’s tail. The result was a melody of meows that became more vigorous as the cats became more desperate. At first, the cats responded with quick and sharp meows, but as the frequency of the pricks increase they would howl in a most distinguished manner. Who could not help but laugh at such music? Thus was the prince raised from his melancholy.” 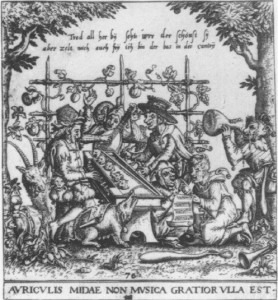 Giachino Rossini: Duetto buffo di due gatti (The Cat Duel)
To me, the torture of animals does not seem a laughing matter, but the prevailing taste of the times apparently thought differently. We have a disturbing account by the composer and music publisher Jean-Baptiste Weckerlin, who described a parade attended by the King of Spain, Felipe II. According to Weckerlin’s report, a bear played the featured cat organ! “The most curious was on a chariot that carried the most singular music that can be imagined. It held a bear that played the organ; instead of pipes, there were sixteen cat heads each with it body confined; the tails were sticking out and were held to be played as the strings on a piano, if a key was pressed on the keyboard, the corresponding tail would be pulled hard, and it would produce each time a lamentable meow.” Even more bizarre, the cat piano was subsequently indicated in music therapy. The influential German scientist Johann Christian Reil not only coined the term “psychiatry,” he also wrote a book titled Rhapsodies on the Application of Psychological Methods of Cure to the Mentally Disturbed. In order to cure the mentally disturbed, Reil suggested the use of the cat piano to shake patients out of a fixed abnormal mental state. “A fugue played on this instrument—when the ill person is so placed that he cannot miss the expression on their faces and the play of these animals—must bring Lot’s wife herself from her fixed state into conscious awareness.” 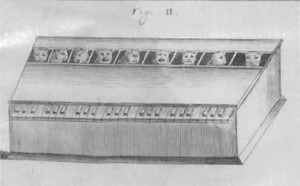 Musical instruments cruelly involving animals are not limited to cats. King Louis XI of France apparently ordered an Abbot to create a “concert of swine voices.” Supposedly, the Abbot built a crude keyboard made of live pigs, with a pointy spike jabbed into the rumps of the animals when the keys were played. We still don’t know if an actual cat or swine piano was ever built, but I am happy to report, that no cats nor pigs were harmed in the writing of this article!