In Tune Society
Bronislaw Huberman and the formation of the Israeli Philharmonic
by Janet Horvath November 29th, 2012 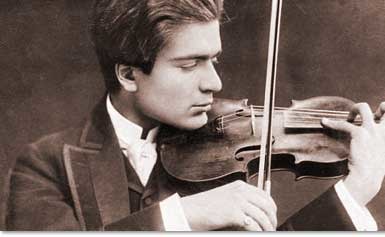 The legendary violinist and peace activist Bronislaw Huberman was born in Poland December 19, 1882 of Jewish parents. His prodigious talent was manifest at a very early age and it soon became evident that he needed the best teacher in Europe. In 1892 his parents took him to Berlin to study with the pre-eminent and irascible violin teacher Joseph Joachim. Even though the ten-year-old child dazzled Joachim, the teacher and student didn’t get along. When Huberman turned fourteen he left his teacher to begin touring as a virtuoso, never returning to study.

Huberman’s extraordinary career took him all over Europe including in Palestine in 1929. The land mesmerized him and his hope was to establish culture and classical music there. As the dark days of the Nazi party loomed in the 1930’s Huberman presaged the horrific fate of the Jewish people. Hitler’s agenda made itself more and more evident between 1933 -1936. Huberman made extreme efforts to save Jewish musicians and get them out of Europe. He declined invitations to perform in Germany with the prominent conductor Wilhelm Furwängler and he dared speak out to the German intelligentsia in an open letter pleading for adherence to the essential values of empathy and humanity.

Foreseeing the immense tragedy unfolding before his eyes, Huberman attempted to raise funds and awareness for an orchestra in Palestine.

Huberman performed countless concerts all over the world and in October of 1934, he traveled to America to play an amazing forty-two concerts in sixty days. He performed with the New York Philharmonic, Bruno Walter conducting and chamber music with famed pianist Arthur Schnabel. After recording, one day, Huberman met John Royal from NBC for lunch. Huberman waxed eloquent about his dream for the Palestine Orchestra. When he asked Royal who he thought should conduct the first performance of the orchestra Royal replied, “Why not ask Toscanini to conduct for you?” Huberman had not expected an enthusiastic response from the great maestro. But Toscanini was a pre-eminent figure in the anti-fascist movement. Due to his firm beliefs he had refused to conduct at the Wagner festival in Bayreuth in 1933. Toscanini thought that the performance of an “orchestra of émigrés” would be a powerful anti-Nazi statement.

To garner more attention for the plight of Jewish artists overseas, Huberman founded the Association of Friends of the Palestine Orchestra enlisting the support of his friend Albert Einstein to chair the organization.

When Huberman returned to Europe the summer of 1935, he was surprised to find that the Nazis had named him “the greatest enemy of the Nazi regime among world musicians.” Huberman’s long-time piano partner Siegfried Schulze was forbidden to associate with Huberman.

The following year Huberman again traveled to the U.S. During his concert at New York’s Carnegie Hall disaster struck. Huberman owned the 1713 “Gibson” Stradivarius. He had just recently acquired anther violin, a valuable Guarnerius. During intermission he decided to play the Guarnerius for the second half of the concert leaving the Stradivarius in his dressing room. Julius Altman a violinist who at the time played in nightclubs, surreptitiously made his way backstage and ran off with the violin. The Strad had been stolen once before, from Huberman’s hotel room in Vienna in 1919. Fortunately, the police were able to track it down within a few days. But this time Huberman never saw the violin again.

Altman, who joined Washington’s National Symphony Orchestra, performed on the stolen Stradivarius for almost 50 years. It was not until 1985 that the world learned the truth. Altman made a deathbed confession to his wife that he had taken the precious violin. Two years later Altman’s wife returned the violin to the insurer Lloyd’s of London for a substantial finder’s fee. After a long restoration Joshua Bell was able to purchase the violin in 2001.

Somehow Huberman recovered from the theft. He continued to fundraise and to ferociously advocate for the imperiled musicians of Europe. He magically acquired 70 exit visas for the elite group of musicians who had been fired from lead positions in European orchestras enabling them and their families to flee to Palestine.

Huberman’s vision became a reality. The Palestine Philharmonic Orchestra was officially founded in 1936. The first performance took place in Tel Aviv on December 26th that year, under the baton of Arturo Toscanini. Although the initial program of the Palestine Orchestra performed the music of Richard Wagner, the orchestra subsequently banned Wagner’s work due to the composer’s anti-Semitism and the association of his music with the Nazi fascists.

When the State of Israel was established in 1948, the orchestra was renamed the Israeli Philharmonic.

Huberman’s extraordinary efforts to come to the aid of his fellow human beings, resulted in saving over one-thousand Jews from the Holocaust, thereby establishing one of the pre-eminent orchestras of the world and leaving a legacy of culture.

The Israeli Philharmonic has performed under the batons of some of the most notable conductors of the 20th century including Leonard Bernstein, Zubin Mehta and Kurt Masur.

They have made many recordings on the Decca label and with Leonard Bernstein, they recorded many of Bernstein’s works as well as the compositions of Igor Stravinsky.

The Israeli Philharmonic’s international tours have taken them across the globe. The IPO will be appearing in the Far East under the baton of Zubin Mehta this year. The tour includes a performance at the gorgeous Opera Hall, Guangzhou Opera House, for a New Year Concert on December 29th 2012. Iraqi architect Ms. Zaha Hadid succeeded in creating a stunning venue.

Huberman’s unknown heroic story is featured in a newly released documentary film entitled Orchestra of Exiles. Directed by Josh Aronson, the film includes archival footage and photos, historical reenactments, and interviews with Pinchas Zukerman, Itzhak Perlman, Joshua Bell and others. This film will no doubt be an inspiration to others as well as document the history of one of the great orchestras performing today.