In Tune Arts
Bringing Colour to Music
by Maureen Buja May 5th, 2014 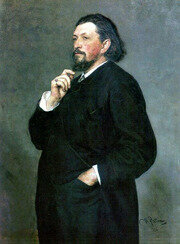 Mitrofan Petrovich Belaieff (1839-1904) was a music publisher in Imperial Russia but made his money in the wood industry. Despite inheriting his father’s business and being successful in it for some 30 years, his heart was really with music. He could play the violin, viola and the piano and, through his philanthropy, brought around himself a society of the leading Russian musicians of the day. The Belaieff Circle included members such as Nikolai Rimsky-Korsakov, Alexander Glazunov, and Anatoly Lyadov. 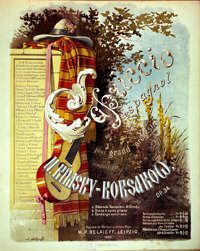 It was Belaieff’s meeting in 1882 with the talented 17-year-old Alexander Glazunov that pushed him from being a musical amateur to a musical publisher. In 1884 he founded the Glinka Prize and its winners in its first years included the leading composers of the day: Borodin, Mily Balakirev, Pyotr Ilyich Tchaikovsky, Rimsky-Korsakov, César Cui and Lyadov. In 1885, he founded the publishing house of M.P. Belaieff in Leipzig. The publishing house was established in Germany so that publications of Russian composers would have international protection. Because Russian was not party to the international copyright agreements, music published in Russia could be freely copied elsewhere in the world. The generation of Russian composers that gained prominence from the middle 19th century needed international exposure and with that, international copyright protection. 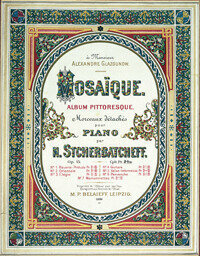 Belaieff’s music publications were beautiful. He used the latest colour process, chromolithography, for the covers and they remain some of the most beautiful music publications to this day. Chromolithography was a process of creating multiple lithographic stones, one for each colour, to create the picture. It was an expensive process but the final results were magnificent, as you’ll see below. Belaieff’s composers benefited from publishing with him: the works were edited well, the composers received more generous payments than from other publishers, and they kept full control over their performance rights.

A wonderful example of the work Belaieff produced is this 1888 edition of Rimsky-Korsakov’s Capriccio espagnol. The colourful serape draped over the column, the flower-bedecked hat, and the guitar suspended on its pink ribbon, all against a background of trees and flowers all give an air of the sunny south. The column is engraved with the names of the musicians of the Russian Imperial Opera who participated in the première performance on 31 October 1887, under the direction of the composer. 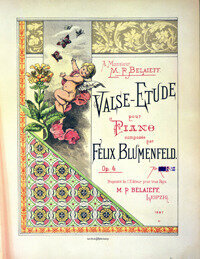 Shcherbachov’s piano work Mosaïque of 1886, dedicated to Glazunov, is a beautiful example of the kind of colour work that the chromolitho process could produce. Against the white background, the reds and blues, greens and yellows appear in different shades to truly bring out the meaning of the title. 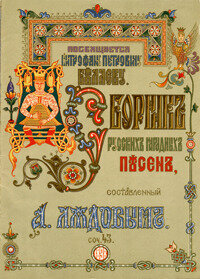 The whimsy of Felix Blumenfeld’s 1887 Waltz Etude is perfectly carried out in the cover imagery – we have the intricately designed floor, the arabesque designs of the wall paper, and between them, the cupid chasing butterflies. All the details seem to convey what we hear in the music.

Lyadov’s Russian Folk Songs of 1898 conveys a far stronger Russian design: the asymmetrical design with its extensive white space, the imaginative figures that seem like medieval manuscript decorations, and the use of colour, with the blues, yellows, and reds. The lettering itself, in Cyrillic, is also fanciful, with each line in a new font.

In all this music production, Belaieff gave us a unique contribution to the world of publishing. A new book, The Beauty of Belaieff by Richard Beattie Davis , from which these images come, is available from G Clef Publishing.