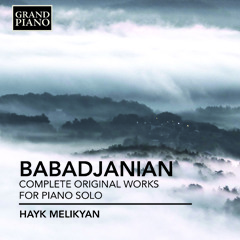 One of the former Soviet Union’s leading composers and a member of the so-called Armenian ‘Mighty Handful’, Arno Babadjanian was admired by musicians of the stature of Shostakovich, Khachaturian, Rostropovich and David Oistrakh. He was also an outstanding pianist and a very considerable virtuoso. Babadjanian’s music explores his native Armenian folk tradition as well as elements of jazz and twelve-tone techniques.