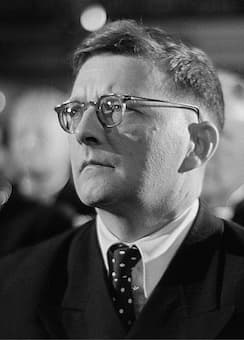 Written in a rush for a celebratory concert, Shostakovich’s Festive Overture is a joyous bubble starting with a brilliant fanfare.

Written for a concert in Moscow at the Bolshoi Theatre celebrating the 37th anniversary of the October 1917 Revolution, this 1954 piece, written after the death of Stalin in 1953, seems to contain so much of Shostakovich’s life and humour. The conductor of the concert at the Bolshoi, Vassili Nebolsin, needed a new work to open the concert and so this work provided him with the ideal bright note.

In an interview he did at the time, Shostakovich said that he’d originally written the work for the 30th anniversary, in 1947. As a post-war, but during the life of Stalin work, it would have then been a confirmation of the ideological conformity of the composer. He said that it represented ‘the state of mind of a man who has undergone the ordeals of war, who has defeated the enemies of the homeland, and now seeks to rebuild his country.’ But, taken as the piece was probably written in 1954, it more clearly expresses his delight at the removal of one of his most debilitating critics. One of Shostakovich’s friends, told the story that ‘the speed with which he wrote was truly astounding…. He was able to talk, make jokes, and compose simultaneously.’ As he completed each page, it was sent to the music copyist to create the parts. It’s said that the ink was still wet when the pages left Shostakovich’s hands. Three days later, the work was complete.

After the fanfare, the work balances itself between two different ideas: a lively theme is started in the clarinets, soon followed by the whole woodwind section and then, a second theme, much broader and solemn, is begun in the horns. These two themes, one of life and vitality and one of pomp and ceremony, alternate for the rest of the piece. The fanfare returns at the end in a variation form. One writer compared the work to the structure of an official celebration in itself: action contrasted with solemnity.


It’s a work that’s easy to get wrong. This version seems to be just too fast!


The work has become a standard for orchestras all over the world and the opening fanfare was used at the 1980 Moscow Olympics to announce the start of each day’s events.