Blog
Cigarettes, Chocolate Milk, and Threesomes
All in a Night’s Work for Rufus Wainwright
by Oliver Pashley October 5th, 2014 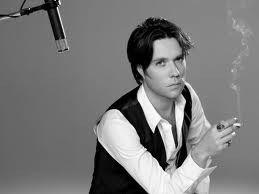 Ah, the Late Night Proms. The only time you can spend in the Albert Hall in summer and not be glared at for shuffling your feet or clapping spontaneously. Starting at 10.15pm, finishing at 11.45, you’d think that this nocturnal timescale would discourage people from taking the risk that non-24-hour London public transport poses, but this wasn’t apparent in the hordes of people filling the Royal Albert Hall to capacity, taking full advantage of seeing a seminal singer-songwriter for as low a price as £5.

Upon entering the hall, I was disappointed – not by what I saw, but what I realised I hadn’t been seeing up until now. In characteristic Late Night Proms fashion, the lights were dimmed, haze filling the stage, the atmosphere relaxed and inviting. My disappointment came from how this is only acceptable in this context, for a pop-orchestral mashup. Some would argue that changing the lighting detracts from the performance, and while I’m not suggesting having a disco ball whirling around during the slow movement of a Mozart symphony, I was surprised at how my mindset – and expectations – changed simply in relation to how the stage looked. The atmosphere was inclusive, embracing – not distant and haughty as a ‘classical’ concert can all-too-easily become.

Wainwright was being accompanied by Britten Sinfonia, an orchestra no stranger to collaboration, being equally at home with Thomas Adès, fusing classical with Bhangra, or accompanying a dance troupe. Many of the arrangements presented were brand new for the evening, a few by Wainwright himself, but mostly from Maxim Moston. Moston’s arrangements drew the most of the huge range colours out of the orchestra, whether it was the shimmering string textures in ‘Sometimes You Need’, or the minimalistic percussion effects of ‘Tiergarten’. 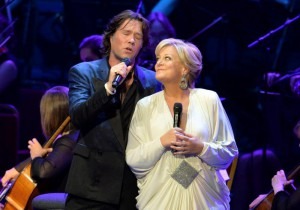 Two arias from Wainwright’s own opera, Prima Donna, featured in the centre of the evening, sung with style by Deborah Voight. We clearly heard the influence Wainwright claimed Puccini to have had on him in his youth, both in the harmony and orchestration of these arias. At the end of the operatic extracts Wainwright strolled out again to sing a Rogers and Hammerstein duet with Voight – perhaps a little disjointed in terms of the style of the evening, but everyone was enjoying the relaxed stage presence of the two, especially given the overt suggestion of a threesome with his husband that Wainwright proposed to Voight, to a delighted cackle from the Proms audience.

The playing of Britten Sinfonia under Johannes Debus was always sensitive and well-controlled, and while some find the placing of an orchestra of Britten Sinfonia’s calibre to an accompanimental role degrading, we should find it exhilarating. The versatility of such an ensemble is what every group should be striving to achieve.

The sensitively orchestrated arrangements require high levels of musicianship and technique to pull off, and of course Britten Sinfonia had no problems doing this. And the fact that an audience primarily there for a singer-songwriter heard a live symphony orchestra: even better.

Wainwright dared to acknowledge the influence Puccini had on him as a child – and why not? Instead of isolating genres, regressing into the ‘classical vs pop’ mindset, we were shown how the two can quite happily coexist on the same stage, instead of being pitted against each other. Classical music is a dying art? Not in the hands of these performers.

Rufus Wainwright & Deborah Voigt – If I Loved You – BBC Proms