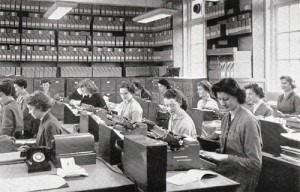 Can you name an instrument used for an orchestral solo that used to be so common that nearly everyone owned one but now are quite rare? One piece of popular light music calls for an instrument that was in every household until 20 years ago. Students often received them for graduation. High executives were not supposed to know how to operate them, but their assistants had the knowledge at their fingertips. In some places, whole rooms were devoted to rows and rows of these instruments.

Leroy Anderson (1908-1975), was a master of ‘concert music with a popular touch,’ and his 1950 work The Typewriter is a masterpiece of his art. The piece transforms the humble manual typewriter into an inimitable percussion instrument. 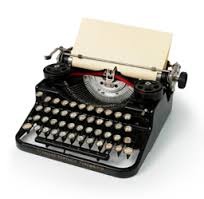 Leroy Anderson: The Typewriter (Alasdair Malloy,typewriter; BBC Concert Orchestra; Leonard Slatkin, cond.)
A bit of explanation of how the instrument in its native form worked: the typist struck the alphabetic keys, which activated a lever, which threw a letter forward, which struck an inked ribbon, which left a letter on the page. At the end of a typed line, usually about 80 characters, there was a signal and then it was necessary for the typist to use the carriage return lever to return the typing position to the left side of the paper and to advance the paper down to a new empty line. In Anderson’s work, you hear the type in action, the ‘ding’ warning the typist that the end of the line was approaching, and the ‘zip-whirr’ of the carriage return, moving back to the start of the next line. 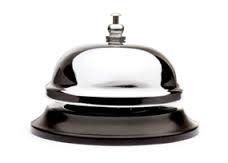 Now that you have the piece in your ear, let’s look at a couple of videos. A note: it’s important to look at these videos in chronological order. For the first one, we have the work performed by a master pianist who only operates the keys and the carriage return. The ‘ding’ is played by a separate percussionist, probably on the celeste (back right corner of the orchestra). Note that this instrument is contemporary with the performer – he would have been familiar with it as a common household item.

In the next video, the performer is Alfred Anaya, a Spanish percussionist. It was always Anderson’s contention that only professional drummers had the wrist development and flexibility to truly carry off this piece. You will note that Anaya is also playing the ‘ding’ – done on a separate bell to the side of the instrument.

In the last video, performed by someone who has probably never owned a typewriter, you’ll see her make gestures on her invisible instrument that would not really be possible on a real typewriter. Remember getting keys stuck? That elbow motion would guarantee it!

The instrument used in Anderson’s performance had to be modified to make it simpler. As you look at the videos, you’ll see that only two of the typist’s fingers are in use, and only two keys of the typewriter are really operative. The ‘ding’ is probably also disengaged because it needs to sound at places other than at the end of the line. You’ve probably never considered the typewriter in terms of performance practice history, but it’s amazing what we used to know so well that we now have forgotten.