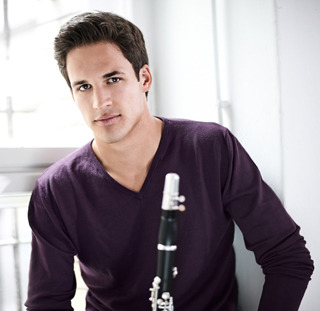 As a clarinettist myself, it was fairly nerve-wracking phoning up the principal clarinet of the Berlin Philharmonic, one of the best orchestras in the world.

“Hello? Hello? Is that Mr. Ottensamer? I’m very sorry, it’s a bit crackly at my end, apologies if I ask you to repeat something!” However I had no need to be worried; Andreas Ottensamer quickly put my fears to rest. However, the fact he was very easy to talk to didn’t make any less apparent the commitment and seriousness with which he treats his career, and music in general.

Your new album Portraits has a very eclectic mix of music – what was the inspiration for the collection of works?

At first glance the album seems eclectic. However, each piece has a connection to my musical career and education. The album’s emphasis is on the concertos, on the Spohr and Copland – they’re its centrepieces. I wanted to make a statement for romantic repertoire on the clarinet. I believe we have a special collection of pieces, because with other woodwind instruments, there’s not that much romantic concerto repertoire. In my opinion, the Spohr is particularly underrated in comparison with the Weber concerti.

The other pieces on the album are connected to my musical development in other ways. I started on the piano, then moved to cello and then finally to clarinet. There are pieces on this album originally written for those other instruments, and for me it’s a challenge to play them in a new arrangement. You have the chance to open new musical dimensions when you do this.

Who inspired you most growing up? (Musically or non-musically!)

Growing up, I had a strong family-based experience. Both my parents were musicians. In Vienna – the city where I was born – there was a present and active music scene.

Did your inspiration change with each change of instrument?

It doesn’t matter which instrument you play. I don’t like the idea of being fixed on one instrument. The instrument is just a means of transport for the interpretation of music, and you choose the most suitable means to communicate. 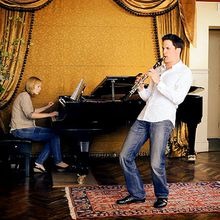 There are some articles which are more about your looks and your past as a model. Was this a help or a burden to your musical career?

My career’s just started so can’t say about the impact yet! I don’t see modelling as the start of my musical career. Certainly in the orchestral world, you don’t win an audition by looking good! It’s something that gets more and more attention nowadays, and while people might be looking at you while you’re walking on and off stage, it’s what happens in between that’s the most important.

You are already with one of the top orchestras in the world and have a name as an established soloist. What are your career plans in the near future?

It’s important to connect the three parts of music making – orchestral, solo and chamber – as you can’t play if one is missing. The trick is to combine them – to enjoy all the aspects. I have a passion for chamber music – I’m now artistic director at a chamber music festival in Switzerland: Bürgenstock Momente. It’s a challenging artistic experience to programme a festival, but it’s great to have the opportunity to invite fantastic players to come and play chamber music.

For my solo career, the second album is already being planned, so as I said, it’s the combination. You learn so much from chamber music that you can use in an orchestra, and knowing how the orchestra works, what its difficulties are, makes you a better soloist. You have to react and adapt. It’s not just about having the nice opportunity to do all three – it’s a necessary part of being a musician.

What advice would you give younger people wanting to make a career as a professional musician?

It’s important to have fun. Being a musician is not a job where you have to fulfil tasks. There’s much more to it than that – it’s art. Above all: be inspired and love what you’re doing. Never get too frustrated or stuck with one thing – remember your love for it.

What interests do you have outside of music?

I love sports, and am a very active sportsperson. The soccer club, founded by myself, my brother and a few friends, has had some games in the past few days! In Berlin, I also play football and tennis. For me, sport is the perfect activity for one’s free time. I think there’s a strong connection there with music – it helps my playing, it makes me more energetic.