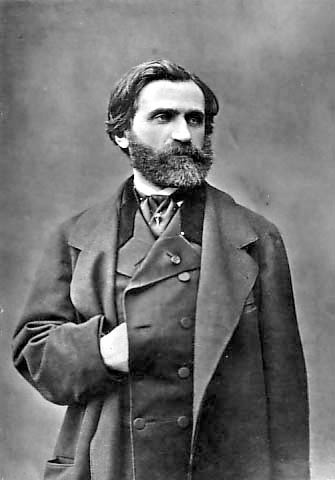 Giuseppe Verdi was a painfully private individual. Details about his romantic encounters are sketchy, and for the most part rely on his own and somewhat inconsistent recollections later in life. We do know, however, that Verdi went to live in the house of the grocer and wine merchant Antonio Barezzi in 1831. Barezzi was the president of the Philharmonic Society in Busseto, and many of its performances and rehearsals were held in a large room in his house. He was also the proud father of three daughters. The eldest, Margherita was only five months younger than Verdi and said to be pretty, gentle and fond of music. Encouraged by her father, Margherita took voice and piano lessons from the young maestro Verdi, and soon the romantic sparks started to fly. For over a year, the young lovers managed to keep their relationship a secret, but all that four-hand piano practice eventually aroused the suspicions of Margherita’s parents. Margherita was, after all, approaching marriageable age and the presence of a penniless musician might easily have compromised her reputation. Although Mummy and Daddy did not fundamentally object to the relationship, a solution had to be found nevertheless.

And so it came to pass that Daddy Barezzi financed Verdi’s first year of study in the far-away city of Milan. Promising to pay back the parental scholarship and to marry his “Ghita” once he had secured a job, Verdi sets off in July 1832. Besides providing an exciting musical and artistic environment, the big city also held attractions of a different nature. Verdi lodged with Professor Giuseppe Seletti and his absolutely stunning daughter Dorina. Seletti would complain bitterly to Barezzi about Verdi’s behavior. “You must understand that being a good musician does not make him an honest man. I found him rude, proud, and acting like a scoundrel in my house. I cannot tell you how much damage he has done to my family, because it is too indecent to write about.” 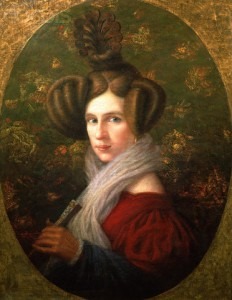 Once Verdi returned to Busetto in 1833, he took Dorina with him. It is hard to tell how Margherita reacted — Daddy Barezzi would have been suitably embarrassed — but the local clergy was outraged. When Verdi applied for the job as the town’s “maestro di musica,” a rival candidate was quickly nominated, leading to an extended and heated town quarrel, which included street brawls, arrests and prosecutions. The matter was finally settled in 1835 — by then Dorina had gracefully exited stage right — and Verdi received the official town contract on 20 April 1836. Having finally secured a proper job, Verdi wasted no time and married Margherita on 4 May 1836 in the Church of the Holy Trinity in Busseto. After a lavish lunch, the couple departed for a short honeymoon to Milan, and subsequently returned to settle in the Palazzo Tedaldi. Margherita was not merely a highly attractive woman she also was a decisive advocate of her husband’s career. By September 1836 Margherita was expecting, and Virginia Maria Luigia — the middle names chosen in reference to her two grandmothers — was born on 26 March 1837. Although happy in his family life, Verdi was determined to make his name in Milan. Margherita wrote, “Never, absolutely never, would he [Verdi] settle in Busetto. Having dedicated himself to theatre music, he would succeed in that and not in music for the church.”


In 1838, Verdi publishes his first book of Sei Romanze (Six Romances), and his son Icilio Romano Carlo Antonio is born on 11 July. In August of that year, tragedy struck and little Virginia died of an unnamed childhood disease. Now more than ever, Verdi was determined to leave Busetto and he left for Milan with the manuscript score of Oberto in his back bag. Margherita and his young son soon followed. During rehearsals for Oberto, Icilio Romano unexpectedly fell ill and despite immediate medical intervention suddenly died on 22 October 1839. Verdi was devastated and soon lay ill himself for several weeks. Once he had recovered in May 1840, it was Margherita’s turn. According to medical opinion, she had contracted encephalitis and instead of getting better she was getting worse. Verdi sent for his father-in-law who barely managed to arrive hours before his daughter died aged 27. “From a dreadful disease, in the arms of her father, my beloved daughter, Margheretha, in the very flower of her youth. She was a faithful companion of the excellent young man, Giuseppe Verdi. I weep over this tragic loss.” And Giuseppe later recalled, “A third coffin goes out of my house. I was alone! Alone!”