Blog
Always Wanted to Learn How to Read Music but No Time to Try? Some Fun Hints
by Janet Horvath June 20th, 2020

I started the piano when I was five. My parents, both musicians, sensed I had talent because after my mother taught a piano lesson I would pick out the tunes with my pudgy little hands. But my first lessons were terrifying. My teacher had flash cards for all the sharps and flats, and pitches and rhythms. She wouldn’t let me start learning simple songs until I memorized them all. 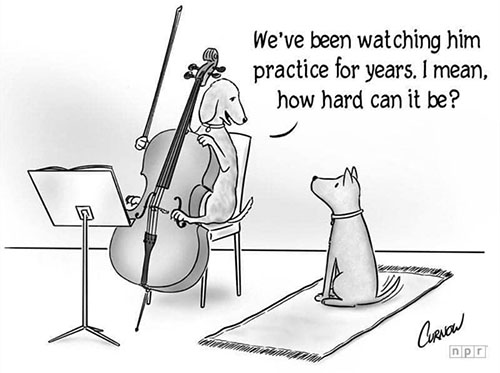 Those who’ve never tried to play an instrument imagine we talented musicians play music effortlessly. How hard can it be? Initially, we not only have to learn how to hold the instruments and position our arms and hands to coax out a decent sound, which is physically taxing, we all have to learn to read the music!

This involves music theory. What a task! Learning the key signatures, time signatures, the note values, rest values, and rhythms, the musical terms (often in multiple languages), as well as learning the clefs and note-reading… It’s like the study of any complex foreign language.

Squiggles and scribbles, which represent the tones and rhythms are written on a staff comprised of 5 leger lines. 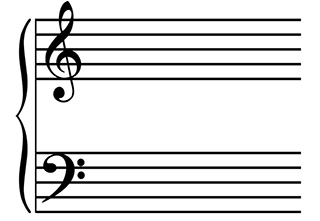 Some of us learned the treble and bass clef notes by rote, or by ear, (and mixed with copious tears); other musicians from all over the world learned them through fun anagrams or mnemonics. 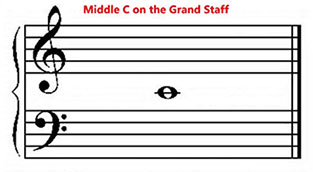 But now comes the hard part. I’ll give you some hints, which we musicians love to use and laugh about.

The treble clef spaces do spell a word, (in English that is…) F-A-C-E. To learn the treble clef notes, which rest on the 5 lines of the staff E-G-B-D-F, I was taught a mnemonic, and I still remember it today: Every Good Boy Deserves Fudge! 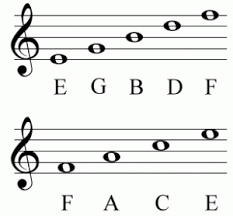 The bass clef spaces A-C-E-G can never be forgotten if you remember: All Cows Eat Grass.

Too old fashioned?
Then learn these more modern interpretations—what a variety of silly sayings! E-G-B-D-F:

And the memorable sayings for the bass clef spaces A-C-E-G-B:

Learning the sharps and flats is another challenge! A sharp or hashtag raises a note ½ a step. A flat or b lowers a note one half step. If you encounter them in a piece they are immediately to the left of the note on the staff.

Musicians play in multiple keys or scale systems. To avoid repeatedly writing an accidental in front of every note, which would make a mess of the manuscript, we have a code or key signature, which is placed at the beginning of the line of the staff. The key signature tells us that every time you encounter certain notes in the key, they will be sharpened or flattened as the case may be. Of course, once you begin the piece you have to remember that key signature…


It’s really not complicated once you understand C major has no sharps or flats. From middle C we build each new key by counting 5 notes up, as exemplified by this chart of the Circle of Fifths. 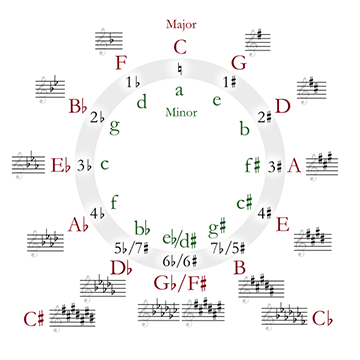 On the piano, C major would comprise only the white keys from C to C. For keys with sharps, we count up 5 notes; For example, from C, counting up 5, we come to G major, which has one sharp and that note turns out to be a black key on the piano. (It’s not quite so easy on a stringed instrument.) Counting up 5 notes more from G, we have D major, which has two sharps etc.

But we don’t all learn the keys that way. Some of us memorize comical but memorable sayings, such as this one I learned:

For the sharps, F-C-G-D-A-E-B:
Father Charles Goes Down And Ends Battle.

For the flats B-E-A-D-G-C-F:
Battle Ends And Down Goes Charles’ Father. 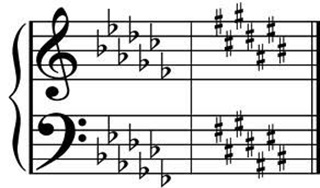 Fortunately, it helps that the first four flats spell the word BEAD, again in English. When you have to play in a key with more than four flats (or sharps for that matter) it becomes more and more difficult. Clearly, they should be illegal key signatures. (but they’re not!) 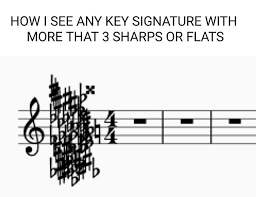 For more creative and contemporary sayings you teachers may like to adopt these:

For the sharps:
Father Christmas Gave Dad An Electric Blanket

For the flats:
Blanket Exploded And Dad Gets Cold Feet

If these don’t tickle your fancy, a quick survey of my colleagues indicated the aphorisms involve animals and food!

English speakers are not the only ones who used these little adages. Here are a couple loosely translated. 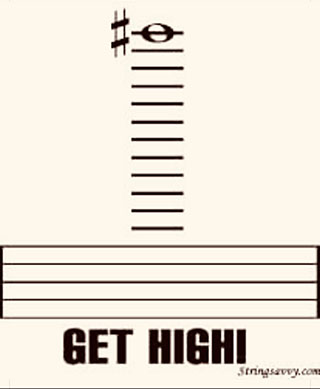 Voila! You know the lines and spaces, and the sharps and flats and you’ve just learned how to figure out what notes are on the page of the music in front of you. Several composers have written pieces for the beginner or amateur player from Beethoven to Britten. No worries if you have to name each note alphabetically to figure them out for a while. We all had to, and when leger lines go off the charts we still have to. What about the rhythms? Ah, now that’s another story!