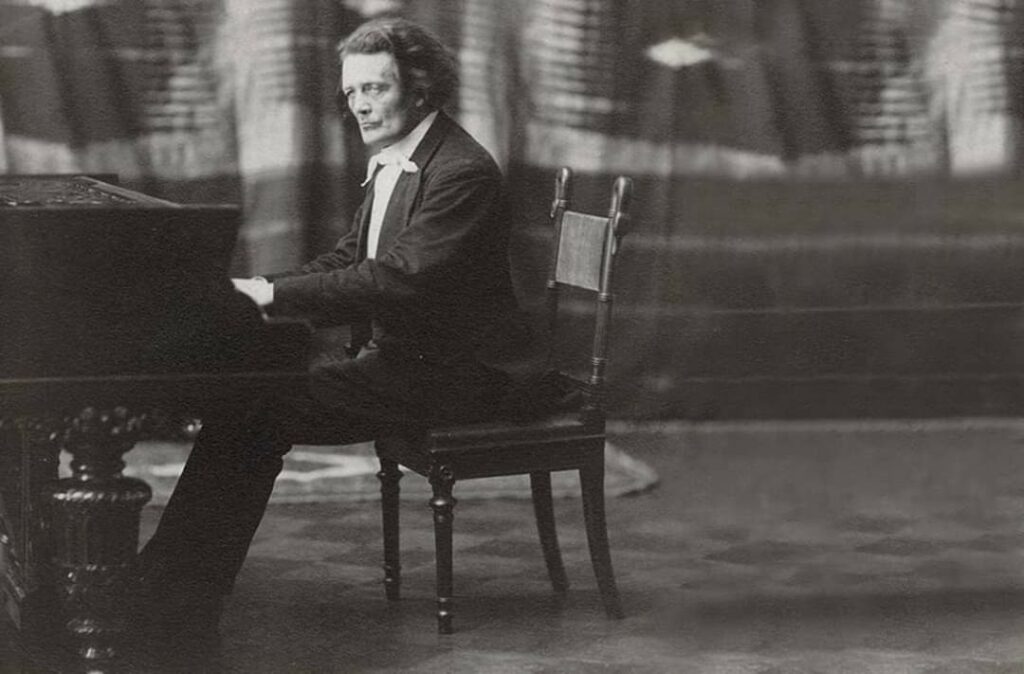 My first approach to Anton Rubinstein’s music came around 2013/14 when I was still a protégé of pianist Leslie Howard. He himself was indeed the first to rediscover and record the 4 Piano Sonatas and other pieces such as the Fantasie, Op. 77, and the Theme and Variations, Op. 88, in the early 1980s. I owe him this revealing discovery that opened a whole new world to me. I had already been fascinated and soaked in Liszt’s music, which Howard also made complete recordings of. What fascinated me the most from the start was the mere vision of very wide chords in most of his compositions, which was never seen before. If I remember correctly, Rubinstein could stretch a sixteenth with one hand! In his music, despite the fact that his writing itself is a bit clumsy, his accents within a phrase sometimes irregular and wacky, and the sometimes lack of complete harmonies in the musical discourse, everything works just perfectly fine. I actually was very impressed by his unexpected ability to create original melodies and tunes out of nothing, despite a clear legacy of the lessons from his Berlin apprenticeship period and considering that in the era when he lived, harmonic experiments were the current fad. 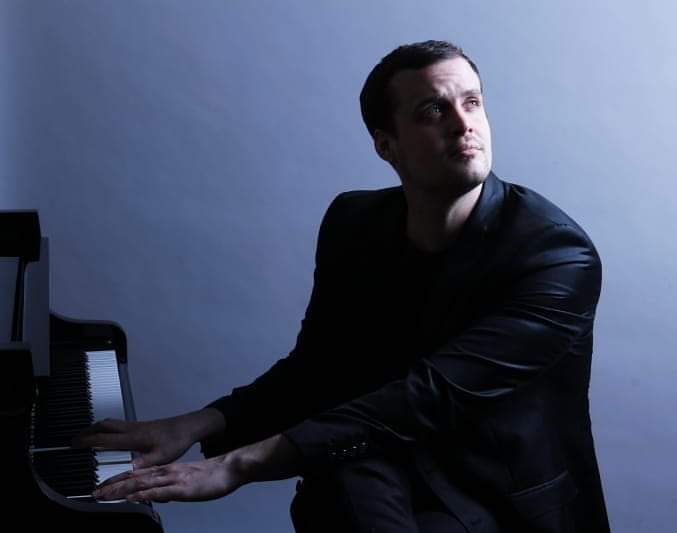 Rubinstein was extremely conservative and fundamentally a Western-style prolific and tireless composer who used certain components of the Russian ethos for coloristic and narrative purposes. Nevertheless, he also managed to create an unmistakable mark of recognition in his own music, in all his vast output.

In the light of all this, I could only begin a long journey already pursued by Howard to be able to guarantee this composer the revival he deserved in the concert scene. Unfortunately, much of his music has been unfairly shelved, especially since the early 1950s following the death of his only true pupil, Josef Hoffmann. Today, you sometimes hear his Piano Concerto No. 4, Op. 70, and more rarely his fifth Piano Concerto, Op. 94, but few of his 6 symphonies or his impressive amount of chamber music, and of his 20 operas only The Demon is still staged.

I began my Rubinstein adventure with the first Piano Sonata in E minor, Op. 12, that, along with the third Piano Sonata in F major, Op. 41, (the composer’s favourite), is on my first record.

Few pianists have recorded these works almost 40 years after Howard’s recording and I am the only Italian pianist to regularly play the sonatas in concert. I found myself being a standard-bearer for Rubinstein and it is my intention and goal to make sure that his music finds a place in the repertoire of all musicians, not just pianists’. It is an honour and a mission to make the public and my colleagues aware of his music.

After a few years, a double surprise was my performance of a Rubinstein piano duo with Howard himself of the Fantasie for two pianos, Op. 73. We gave this over 150-year-old work its public premiere in Italy, India, and Portugal. This nearly 50-minute composition was written in 1864 and dedicated to his brother Nicolai with whom he performed it in a private concert. The later Piano Sonata for 4 hands, Op. 89, written also for performance with his brother, sometimes seems to require even more than four hands! 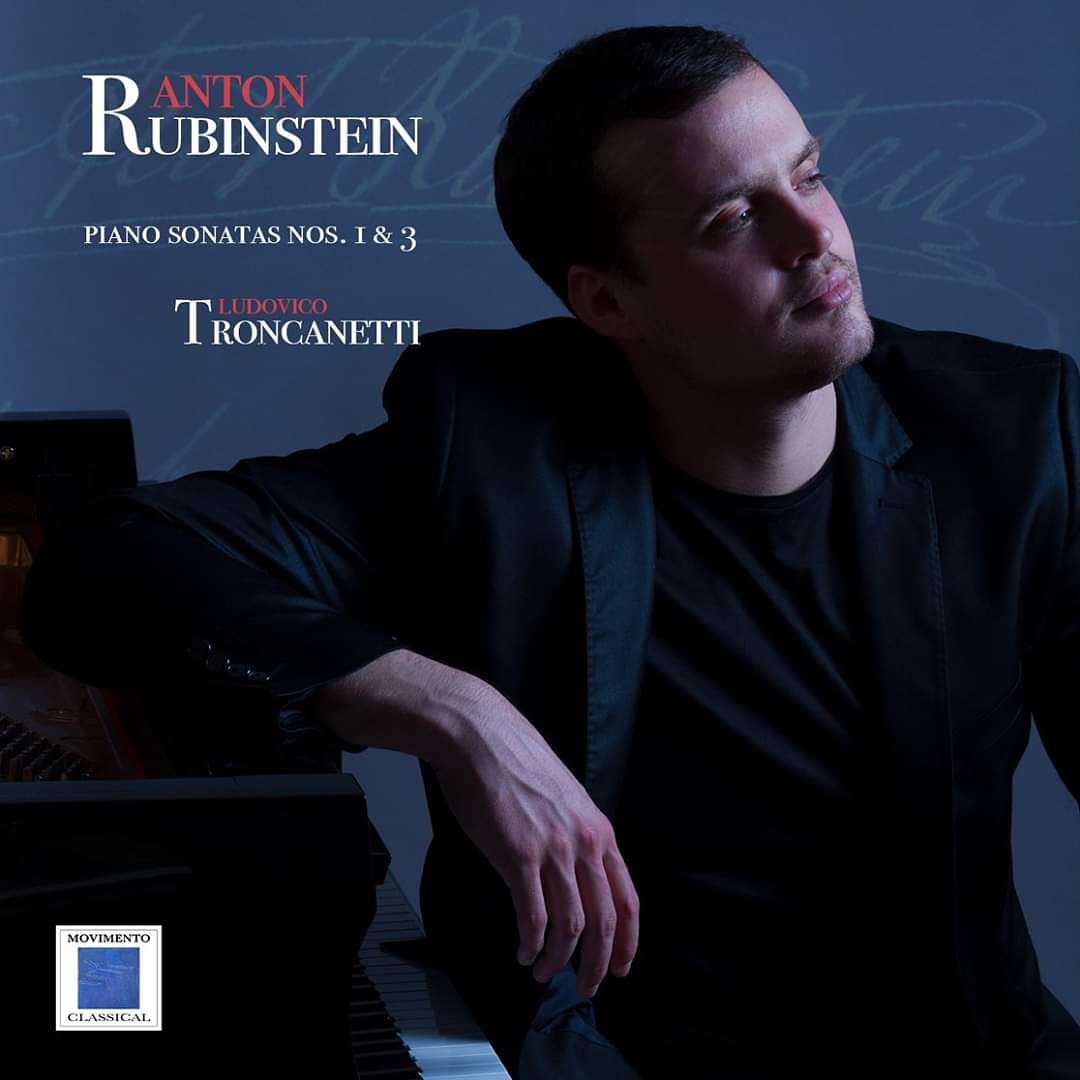 More importantly, recently, I had a great stroke of luck and in September 2019, I was invited by conductor Fabio Mastrangelo to make my debut in St Petersburg, just where Rubinstein founded the Conservatory and where he died in 1894, with the third Piano Concerto, Op. 45, performing with the St Petersburg Northern Symphony. What more could I ask for?! It was an immense triumph that I will never forget, not least because within a few months I found myself making my debut in Germany in Riesa, near Dresden, another city dear to the composer and where he lived for a time, with the same concert and a fantastic orchestra, the Elbland Philharmonie Sachsen. I would never have guessed that my dreams would come true and that my commitment and perseverance would pay off so handsomely. The longer the journey becomes, the more opportunities that arise for each of us to be able to show who we are and what we have to share through music. I strongly believe that music should not simply be performed but reincarnated with all our might, this is the mission of us musicians/interpreters according to my thinking.

Personally, I still have a lot to do and I hope in the near future to be able to play this music even more, more records, maybe and especially on Rubinstein’s music still unknown, and try to leave a nice memory for future generations. If you truly believe in what you do sincerely, then sooner or later, it will happen. The main ingredients are heart, freedom, sincerity and courage.