Composers Love
A life of the two of us!
Britten and Pears II
by Georg Predota October 6th, 2013
Tags: Britten 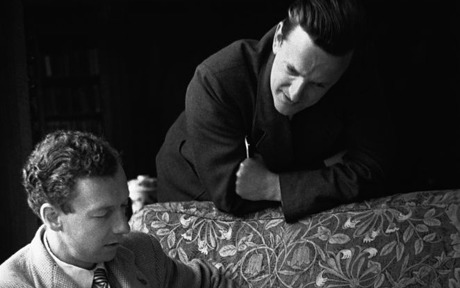 In 1974, Benji Britten and Peter Pears exchanged a number of remarkable letters that summarized not only their personal relationship but also their artistic careers. Dated 17 November 1974, Britten writes, “My darling heart (perhaps an unfortunate phrase, but I can’t use any other). I feel I must write a squiggle, which I couldn’t say on the telephone without bursting into those silly tears — I do love you so terribly, not only glorious you but your singing. I have just listened to a re-broadcast of Winter Words and honestly, you are the greatest artist that ever was — every nuance, subtle & never over-done — those great words, so sad & wise, painted for one, that heavenly sound you make, full but always colored for words & music. What have I done to deserve such an artist and man to write for?…I love you, I love you, I love you, B.”

Pears replied a couple of days later. “My dearest darling, no one has ever ever had a lovelier letter than the one which came from you today — You say things which turn my heart over with love and pride, and I love you for every single word you write. But you know, Love is blind — and what your dear eyes do not see it that it is you who have given me everything, right from the beginning, from yourself in Grand Rapids! Through Grimes & Serenade & Michelangelo and Canticles — one thing after another, right up to this great Aschenbach — I am here as your mouthpiece and I live in your music — And I can never be thankful enough to you and to Fate for all the heavenly joy we have had together for 35 years. My darling, I love you — P.” At the time of this intimate exchange, Britten was recovering from surgery to replace a heart valve, and Pears was engaged in a number of “extra-marital” sexual affairs. However, this should not distract from the fact that their partnership of nearly forty years created an astonishing and remarkable musical legacy.

Although Britten had always been interested in writing for the singing voice, it was Pears’ nasal, slightly prissy and desperately English tenor that became the most constant source of inspiration for the composer. During their stay in the US Britten composed the song-cycle Seven Sonnets of Michelangelo for Pears and dedicated it “To Peter.” Once the couple returned to England they performed in a number of recitals and made several recordings, with Britten playing the piano. However, it was the title role of “Albert Herring” in Peter Grimes that catapulted their artistic symbiosis squarely into the public limelight. Written as “a confrontation between an individual and society,” Peter Grimes was first performed at Sadler’s Wells in London on 7 June 1945. Britten and Pears created the quintessential antihero, perhaps deservedly alienated from society. However, through their intimate collaborative effort, the central character is not merely sadistic and cruel — a one-dimensional villain in Crabbe’s original poem — but is conflicted and driven, “no more villain than victim.” Over the next 30 years, a number of collaborative efforts followed, among them the role of Captain Vere in Billi Budd (1951), Essex in Gloriana (1953), Peter Quint in The Turn of the Screw (1954), the Madwoman in Curlew River (1964), and Gustav von Aschenbach in Death in Venice (1973). Britten and Pears were instrumental in the revival of English opera, and established an artist development program for the Aldeburgh Festival. They shared the stage, a home and a bed, with the personal and artistic relationship intimately intertwined. Peter Pears famously said, “Our relationship isn’t the story of one man. It’s a life of the two of us.”