Social media has become a necessary way of reaching audiences. Today’s artists have to make the decision to ‘beat them or join them’ and take on Instagram and Facebook pages, Twitter accounts, and blogs, and choose whether to manage them personally, which is very time-consuming. Many artists hire someone to post entries for them. Hilary Hahn is one artist who has embraced the trends. Skillfully using social media she’s come up with several unique and remarkable projects, which has expanded her reach and educated her fans. 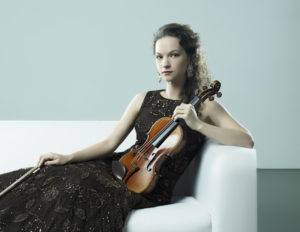 One of the first undertakings was in 2011, “In 27 Pieces: The Hilary Hahn Encores.” Hilary’s goal was “to expand the encore genre to embrace works of different styles.” She listened to hours of contemporary music and ultimately chose 26 composers to write a piece for her. The composers included Edgar Meyer, Jennifer Higdon, David Lang, Nico Muhly, Einojuhani Rautavaara, Du Yun. Such a cool idea and each composers’ musical language stood out from one another. Hilary increased anticipation over the project when she announced she would select the 27th composer through an online contest. Over 400 composers submitted their work for the commission anonymously. The winner—composer Jeff Myers, captivated Hilary with his piece The Angry Birds of Kauai. Among the excellent compositions were 10 more, which Hilary denoted as honorable mentions.

Myers: The Angry Birds of Kauai
Davidson: Blue Curve of the Earth 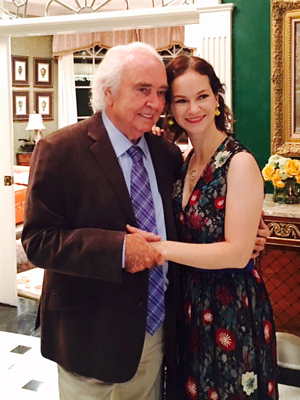 Since then, she has released a recording of the 27 works, which won a Grammy award in 2013, and this year, in 2019, after working several years on the project, the sheet music was published by Boosey and Hawkes with Hilary’s markings, notes, and each composer’s bio. Some composers wrote their music by hand, others suggested unique performance instructions such as improvisation, and still others wrote in atypical manuscript, (there were no bar lines in one composer’s piece.) Hilary spent many long hours during the editing process to make the pieces readable and accessible to other violinists. The music sold out immediately.

The 27 encores led to a grander project. Many violinists consider Bach’s Six Sonatas and Partitas, a set of six interconnected and polyphonic works for solo violin, as the epitome of the repertoire. Hilary says she’s played Bach every day since she was eight. She had an idea. Antón García Abril, the award-winning Spanish composer, had composed “Three Sighs” for her encore project, and one of the movements was for solo violin. He seemed to write exquisitely well for the violin. Hoping to build on this traditional structure, eager to feature a composer she admired, Hilary commissioned Abril to write Six Partitas for her.

The composer was able to shape the Partitas to suit Hilary’s brilliant interpretive skills and remarkable technical proficiency. Released in April of 2019 on Decca, the works are passionate, edgy, impulsive, and gorgeous. What a gift to future generations.

For her most recent venture, Hilary used Twitter and Instagram. How exiting for her fans to be able to watch Hilary in action during #100DaysofPractice. On her site @violincase she posted how she works to prepare a Bach Concerto, a world premiere, Mozart Violin Concerto No 5, and other pieces, while challenging her followers to join in and commit to a 100-day practice routine. What a privilege to see such an artist at work, and what a great way to educate those who imagine that artists at a certain level don’t have to practice anymore!

Several hundred people followed her daily routine, although with her packed schedule they were rarely predictable. She practiced very early in the morning in the dark, in her PJs, in dressing rooms and hotel rooms, even in a restroom, and rarely, if she was lucky, she snagged a moment to practice onstage. Some of her sessions were painfully slow; she isolated specific difficulties; Occasionally, she used only the left hand, she played without vibrato, she practiced in rhythms, and at least once she admitted to not feeling at all like practicing that day.

@violincase
Day 100! Thank you all for tagging along on this round of #100daysofpractice! You’re the most supportive, encouraging community. I really appreciate that and don’t take it for granted. For those of you who’ve embarked on your own 100, congrats on every day, and good luck with the remainder!

These past 100 saw me through a bit of an evolution. The combo of making and watching my daily videos, working on a large range of repertoire in close succession, grinding through more hours of practice and rehearsal than normal for me, and setting an overarching goal of improving and stabilizing my playing ahead of my sabbatical in September, enabled me to effect some technical changes that I’d been trying to make for years but hadn’t been able to iron in. It was like clearing hurdles I hadn’t realized were there. So, despite not feeling outwardly sparkly during this sequence of 100, it was internally a very productive time, especially once the work began to click in about halfway through.

Hilary Hahn has generated a great deal of excitement and momentum for her projects using social media, and she shows us so brilliantly how contemporary means can advance classical music.

100 days of practice: recuperation and can’t do it!

100 days of practice: Beethoven in rhythms