Guest Posts
A Celebration of the Piano in Chamber Music
by Daniel Tong May 6th, 2022 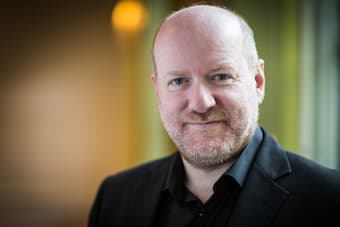 In November this year, six selected young ensembles will be invited to Birmingham to take part in our International Piano Chamber Music Festival. All six will give a recital as part of the Festival programme and take part in masterclasses, three progressing to the final concert after which one chamber group will be awarded a prize that includes a Wigmore Hall debut, commercial recording with Resonus Classics, mentorship and further public engagements. All applicants will be heard at preliminary audition in June by a panel who will make a judgement based on performance alone, without access to references or biographical information. Our Festival in November promises to be a real celebration of the piano in chamber music, where Royal Birmingham Conservatoire students will perform alongside renowned professional artists, students from other UK conservatoires will be invited to take part, and all of the competition jury will also perform and give masterclasses. We have waited a long time for this moment.

During lockdown, I personally went fifteen months without performing in concert, as we were protecting (and continue to protect) vulnerable family members. Initially I entered into the spirit of online performances, but my appetite for playing to an empty room and smartphone soon waned, particularly as I observed the less-than-magnificent viewing figures for my own efforts in an increasingly saturated virtual concert hall. Edition after edition of my biannual Chamber Music Festival in the Wye Valley was cancelled; I was unable to make music with my colleagues, chamber music having always been a huge part of my life. When I re-emerged in June 2021, playing Dvořák’s life-affirming Quintet at the Wigmore Hall with my friends the Elias Quartet, it was a deeply emotional moment.

There was however another, more positive side to the online activity during lockdown. I needed to engage with my students at Conservatoire who were spread around the globe, and became increasingly inventive in my teaching methods. We explored in ways we had not tried before, across the huge range of available online material, and with a newfound spirit of directness and honesty. This was not a moment to be quibbling over a wrong note, and most technology isn’t refined enough to carry the nuance of voicing in a chord across the band waves. Music, its meaning and message were on the agenda. At the same time, I was experiencing something else quite wonderful at home, as we home schooled our daughter and enjoyed an endless diet of free culture from orchestras to opera houses, theatre to artists’ front rooms. As regulations were relaxed, and universities and concert halls cautiously re-opened, I was keen not to lose all that had been learned in the often-hard intervening months. Lockdown had deprived us of much, but had also been a god-sent lesson in cultural diversity and access. 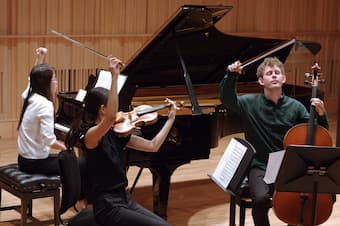 Trio Opal performing in the 2018 competition

So, in this spirit, our Chamber Music Competition is as open and collegiate as it can be. As I have mentioned, all applicants will be heard, in live UK auditions, but also in recorded international auditions, all heard by the same jury of course. We will live stream the six young artists’ recitals in November, and Classic FM have partnered us to share the livestream of the Grand Final. All six ensembles will benefit from considerable exposure, the chance to make friends amongst the Festival atmosphere, and masterclass coaching. The benefit to our own Conservatoire students will be immense, taking part in the concert programme in their own ensembles and side-by-sides with leading artists, as well as having the chance to benefit from a wealth of experience in masterclasses and as audience members.

Winners of the inaugural competition Kapoor-Leung Duo look back at their performances in the 2018 final, and forward to their Wigmore Hall debut.

Daniel Tong is a pianist and teacher, founder of the Wye Valley Chamber Music Festival, pianist of the London Bridge Trio and Head of Piano in Chamber Music at the Royal Birmingham Conservatoire.
www.danieltong.com