Blog
Yes, You Can Have a Concert in a Carpark!
by Frances Wilson September 13th, 2020 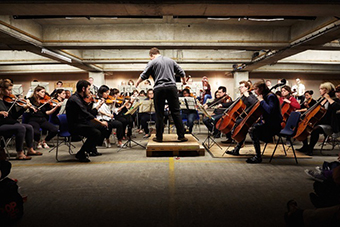 Multi-Story Orchestra performing in unusual spaces such as this carpark

A concert in a carpark? It’s certainly a novel way to experience live classical music, orchestra and audience gathered on Level 8 of a 1980s brutalist hulk of ugly concrete. The traditional rules of engagement of classical music are more relaxed in this unusual setting, but the audience are as committed as the musicians. Complaints about extraneous noise or inappropriate applause are rendered redundant, for the music is regularly suffused with the sounds of the city.

Not all concert venues are gilded historic halls or sleek modern spaces. A few years ago, I attended two Prom concerts in aforementioned carpark in Peckham, south-east London. Regarded as “up-and-coming” and “London’s coolest neighbourhood”, it’s an ethnically diverse and vibrant district, but not the most obvious setting for classical music. 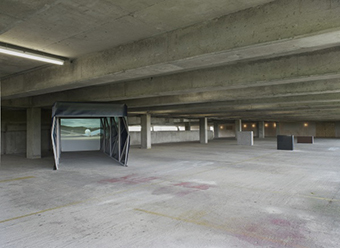 The carpark in question is no longer a carpark – though it is still obvious that that was once its function. Repurposed in 2007 as Bold Tendencies, it hosts summer cultural events and commissions and promotes arts projects. It is also home to the aptly-named Multi-Story Orchestra, an ensemble comprising mostly young musicians which performs in unusual spaces. At a time when those inside and outside classical music are questioning how music is presented, how long concerts should last, and how to engage younger audiences, the Multi-Story Orchestra’s approach seems totally in touch with the Zeitgeist.

The orchestra plays traditional core repertoire but also presents music which is rooted in the sounds and communities of the venue’s urban setting. The players are casually dressed and the audience sit on folding chairs – about as far removed from the plush crimson velvet seats of the Wigmore Hall. A brutalist concrete lump with low ceilings and unremittingly dismal grey walls cannot possibly be a good place to hear music! The wind slices through the exposed apertures in the building and the music is frequently augmented by the rattling trains below and aircraft roaring overhead. None of this matters, of course, because here is music played with passion and commitment, and presented in a more relaxed manner which makes it appealing and accessible. The close proximity of orchestra to audience creates a connection which is immediate and engaging, especially for younger audience members (it was encouraging to see so many children at the concerts). 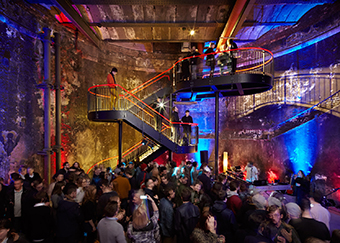 This is not the only unusual venue I’ve attended for classical music. A couple of years ago, I went to a performance of Messiaen’s profoundly moving ‘Quartet for the End of Time’ in Brunel’s Shaft, the 50-foot deep Grand Entrance Hall to Isambard Kingdom Brunel’s Thames Tunnel, the first ever road tunnel under the river. The shaft has been converted into a striking performance space, but its original purpose is still very evident, and trains rumble in the tunnels beneath as the music is played in its surprisingly good acoustic.


The places in which classical music is traditionally performed influence how we perceive, receive and respond to it. In the grand, historic European halls – the Musikverein in Vienna or the Concertgebouw in Amsterdam, for example – an air of formality and reverence pervades the space, and the rituals and etiquette of classical music are continually reinforced. Such attitudes are further bolstered by concert managers, musicians, critics and commentators, gatekeepers and audiences. Premiering new works in a prestigious venue brings extra kudos, while performances of the “greats” of the repertoire reconfirms the special status of the “core canon”. Conversely, performing a Mozart or Beethoven symphony in a Peckham carpark confers on that space a special status through the “greatness” of the music, and thus that venue becomes accepted as a place to hold classical concerts. The space undoubtedly influenced the concert experience – it was cold in Brunel’s Shaft and the industrial austerity of the place seemed fitting for a piece of music written by a composer in captivity.

Reich: Music for a Large Ensemble (Steve Reich and Musicians)


In fact, concerts in more unusual or unexpected settings are not new. In the UK, the Orchestra of the Age of Enlightenment has been at the forefront of bringing classical music out of the traditional concert hall and placing it in more relaxed settings, such as pubs and bars, and eschewing much of the etiquette which some find so offputting or restrictive; in a pub there’s no requirement to sit in hushed reverential silence, and applause between movements is welcomed and actively encouraged. Such events tend to attracted younger, often much younger, audiences and offer an alternative, accessible way in to classical music for those who may be reluctant to sample the artform in a more formal setting. Performing in non-traditional venues also gives musicians and concert planners an opportunity to be more creative.

The general adherence to the norms of classical music often makes thinking outside the traditional concert hall challenging, for concert organisers, performers and audiences. Yet while coronavirus is still in circulation around the world, classical music must reflect on and reconsider how it presents itself. Agile, adaptable, imaginative concert organisers and musicians are likely to fare better in the immediate term.

But fundamentally, concerts, whatever the genre of music, are about the shared experience and it should not matter where the music is performed if that sense of collective commitment, participation and cooperation is created between musicians and audiences.