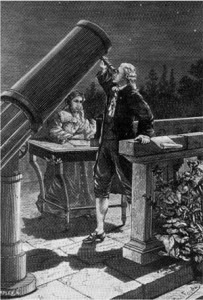 When William Herschel (1738-1822) peered into the night sky on 13 March 1781, he noticed something rather peculiar. One of the celestial bodies he had been observing through his homemade telescope was moving oddly across the sky, and Herschel initially thought that he had found a new comet. After further observations and extended discussions with colleagues and friends, however, Herschel came to the realization that he was not looking at a comet or a star, but at a planet beyond the orbit of Saturn! This was the first planet to be discovered since antiquity, and Herschel proudly named the object “Georgium Sidus,” (Georgian star) after King George III of England. As you might well imagine, it made Herschel the most celebrated observational astronomer overnight! In France, where reference to the British king was to be avoided at all cost, the new planet was known as “Herschel,” and a Swedish astronomer proposed the name “Neptune Great Britain.” Finally, it was suggested that the new planet should be named after the Latinized version of the Greek god of the sky. And thus, after much pickering to and fro, the name “Uranus” became universally accepted. For expanding the known boundaries of the solar system for the first time in history, William Herschel was elected a Fellow of the Royal Society, appointed “The King’s Astronomer” in 1782, and awarded grants for the construction of new, and more powerful telescopes.

Uranus had not been the first significant discovery made by William Herschel. In October 1779, Herschel began a systematic search for double stars, and soon discovered a significant number of binary and multiple stars. He also discovered that the Martian polar caps vary seasonally, and he pioneered the use of astronomical spectrophotometry as a diagnostic tool, eventually leading to his discovery of infrared radiation. And did I mention that he was the first person to realize that our solar system was actually moving through space? Many of these exciting discoveries were made possible by the telescopes Herschel constructed at his home in Bath. His sister Caroline described the scene at the family residence. “To my sorry, I saw almost every room turned into a workshop; a cabinet-maker making a tube and stands of all descriptions in the drawing-room.” During his career, Herschel constructed more than 400 telescopes! The largest and most famous reflecting instrument from his workshop had a diameter of 1.26 meters, and a 12-meter focal length. 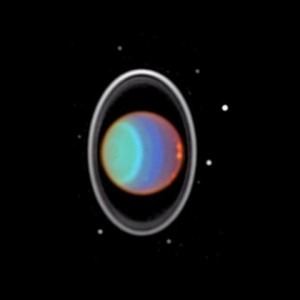 William Herschel: Chamber Symphony in F major
Astronomy, however, had not been Herschel’s first love. That honor fell squarely on music! In his autobiography, Herschel reports, “I was born in the city of Hannover, my father was a musician and I was the second of four sons; all of them remarkable not only for their genius in music, but much esteemed as men of valuable character.” William started violin lessons at the age of four, and took oboe lessons soon thereafter. By age 8, he was an accomplished harpsichordist and not much later, he had mastered the organ as well. William visited England for the first time in 1756, and permanently settled in the country in 1759. Barely a year later, Herschel was appointed director of the Durham Militia Band, and he was offered the post of organist of the Octagon Chapel in Bath. Besides his duties as Chapel organist, he played the violin in the Bath orchestra and appeared as soloist in several of his own concertos for oboe. A contemporary listener famously documented Herschel’s manner of playing. “Never before,” wrote Dr. Edward Miller, “had we heard the concertos of Corelli, Geminiani and Avison, or the symphonies of Haydn performed more chastely, or more according to the original intention of the composers than by Mr. Herschel.” Predictably, Herschel also dabbled in composition and left us 24 symphonies, and a substantial number of concertos for oboe, violin, viola, and organ. He also wrote a number of solo works for organ and harpsichord, as well as various sacred vocal works including psalms, motets and sacred chants. However, it was Herschel’s fame as an astronomer that brought him in touch with the great European musicians of his day. When Haydn visited England in 1791, he visited Herschel at Observatory House near Slough! Herschel died on 25 August 1822, and a substantial number of celestial and manmade objects are named in his honor, including craters on the Moon and on Mars, an asteroid, and the Herschel Space Observatory launched on 14 May 2009. Herschel’s epitaph tellingly reads, “Coelorum perrupit claustra,” (He broke through the barriers of the heavens.)