In Tune Society
What’s Your Idea of an Instrument
An Interview with Lapo Vettori
by Maureen Buja December 24th, 2017 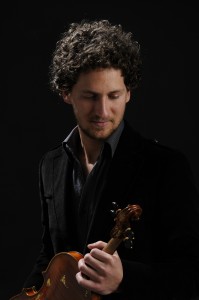 We spoke recently with Florentine luthier Lapo Vettori, a third-generation string instrument maker. The Vettori family began instrument making in 1935 and continues today, making violins, violas (Lapo’s specialty) and violoncellos. Over the past 80-some years, the family has made hundreds of instruments, each a part of the history of Italian violin making.

To the uneducated eye, violins (and their ilk) look more alike than different. Yet, to Lapo, each instrument is distinctive. In looking at his family’s instruments, he can tell immediately not only who made it but also when it was made. He noted that over the last 20 years of his grandfather’s career in particular, he made distinctive changes. Grandfather Dario started the company, it was continued by his two sons Carlo (now retired) and Paolo, and now is continued by Paolo’s three children: Dario II, Lapo, and Sophia. 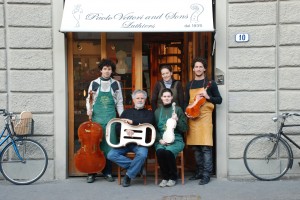 The Family shop in Florence

The family’s instruments were originally modeled on those of Stradivarius, but later changed to using the instruments of Guarneri del Gesù as a model, among others. The two sources have different timbres: the Stradivarius with a brighter sound and the Guarneri with a darker tone.

When we talked about the wood of the instruments, there are three principal woods used in any violin and viola: spruce for the top; maple for the back, neck, and sides; and ebony for the fingerboard. If it’s a cello, then the back is made of poplar, but that wood is too soft for the smaller instruments. Each year they source wood to add to their wood that is being aged, and, in the case of ebony, need to guarantee that the rare wood comes from sustainable sources. They were particularly fortunate a few years ago to get a supply of very old spruce – a Mantuan palazzo was being taken down and they secured wood that dated to 1600 and had been cut down in 1824, according to the dendrochronology (or tree-ring dating) report on the wood. 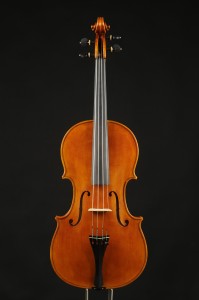 Lapo’s award-winning viola, front and back

One of Dario II’s cellos is played by Lithuanian David Geringas, who had been a student of Mstislav Rostropovich.

Lapo’s 2009 viola won the acoustics award at the XII Triennale of International Violin-making Competition “A. Stradivari” in Cremona. 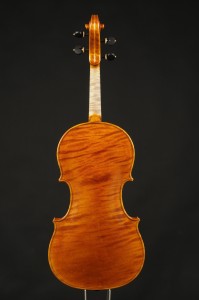 Lapo’s award-winning viola, front and back

If you commission an instrument from the Vettori family, it’s at least a 6-month process, added onto a waiting list that’s at least a year long. Each member of the family makes violins, violas and cellos, but while Lapo like to make violas, his brother likes to make cellos, and his sister and father cover violins. One rare thing they make is a ‘quartet,’ where 2 violins, a viola and cello are made at the same time from the same wood – it’s a specialized product for a special demand, either for a string quartet or for a collector. One of the longest process in the creation of your violin is the varnishing – 40-50 layers of varnish, each applied and sanded down to achieve the wonderful warm colour of a Vettori instrument. 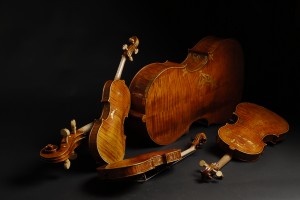 Mr. Vettori talked about how the business had changed since his grandfather started it in the little town of Firenzuola, outside Florence, where he was known as ‘The Violin-Maker of the Mountains.’ Mr. Vettori travels the world whereas his grandfather probably never left his village.

Each instrument is approached with the question of “What’s Your Idea of an Instrument” because each piece of wood is different, each commissioner desires something different, and with every instrument he makes, the violin-maker further refines his definition of what the instrument should be. As a violin maker for the past 16 years, Lapo considers himself as a relative newcomer to the field and every instrument he makes takes him further along the path to the creation of his definitive masterpiece.