Composers Anecdotes
When West is East
The Cowboy Music of Ennio Morricone
by Maureen Buja May 3rd, 2015 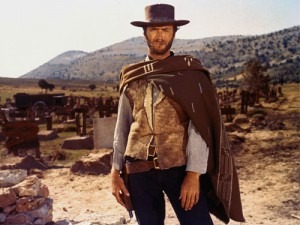 The Good, the Bad and the Ugly

It’s odd, when we think about it, that when we think of music for cowboy movies, we think of movies made in Spain by an Italian director with an Italian avant-garde trumpet player as composer. Ennio Morricone’s film music written for the master of spaghetti western, Sergio Leone, and his breakthrough film Per un pugno di dollari / A Fistful of Dollars (1964) changed everything about the music for westerns. Leone’s new take on the western, mixing the sensibility of Italian film-making with a stock idea of the western, resulted in movies with an operatic feel. Extreme closeups, often feeling like finely-lit portraits, replaced the standard reaction shots that had gotten so old. Morricone’s music also followed a new path. Unable to score for a full orchestra, due to the budget, he did a great deal with a minimalist assembly of instruments and sounds such as gunshots, whip cracks, whistles, voices, and even a mouth harp; regular instruments included trumpets and the very modern Fender electric guitar.

Morricone: Per un pugno di dollari (A Fistful of Dollars) (arr. for cor anglais, trumpet and orchestra) (Laila Ward, cor anglais; Mike Allen, trumpet; Royal Philharmonic Orchestra; David Firman, Conductor)
For audiences used to the full orchestral sound common in the westerns of directors such as John Ford, this new sound, and its use of sound as a special effect, changed music for the western. The main theme for Il buono Il brutto Il cattivo / The Good, the Bad, and the Ugly (1966), the third part of Leone’s ‘Dollars’ trilogy was recorded by Hugo Montenegro in 1968 and went to gold on the pop charts;

Here, again, we hear the whistles, the voices, the wah-wah trumpet, and the minimalism of Morricone’s scoring. The other theme from The Good, The Bad, and The Ugly that had a wide circulation was ‘The Ecstasy of Gold,’ which has been used as the concert opening music by Metallica and as concert closing music by The Ramones.

After The Good, The Bad, and The Ugly, Morricone’s next ground-breaking film music was for Leone’s C’era una volta il West / Once Upon a Time in the West (1968) where composition for the film started long before filming began. Each character has its own leitmotif that relates both to the spirit of character and the spirit of the West. The music was composed ahead of time so that Leone could play each character’s music during filming to set the background for the scenes to be shot. Because of the international makeup of the film crew and actors, Leone’s films were shot silent, with sound and dialogue added later.

Morricone: Once Upon a Time in the West: Main Theme (Yo-Yo Ma, cello; Roma Sinfonietta; Ennio Morricone, Conductor
With the films he scored with Leone, Morricone changed the sound of the western and our concept of the west – no longer a wagon train with orchestra, it’s now a solitary man standing up for good or gold or just to be contrary, but with a minimalist soundtrack that fits.