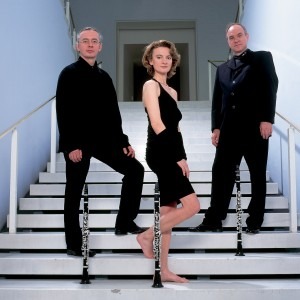 Stepping into the cool foyer of Wigmore Hall in the middle of a blisteringly hot London day has the same effect as a chilled drink on a summer’s day: instantly cool and refreshing. Unfortunately, seeing as only bottled water was allowed in the auditorium, I had to make do with my metaphors as I took my seat for the Trio di Clarone’s lunchtime concert.

The Trio di Clarone is formed of brother/sister duo Sabine and Wolfgang Meyer, along with Sabine’s husband Reine Wehle. Together they have championed basset horn trios all over the world, in addition to performing duos and trios with combinations of clarinets and basset horns. Today was a concert of the latter; joined by pianist Kalle Randalu, they took a whistle-stop tour of trios for basset horn, clarinet and piano.

The basset horn as an instrument is often associated with Mozart – not least due to his 5 Divertimenti for a trio of the instruments. Apart from these pieces, and the wind serenade Gran Partita, the basset horn remained fairly neglected until Mendelssohn wrote his two Konzertstücke for basset horn, clarinet and piano.

The concert opened with the second of these Concert Pieces in D minor, a piece that, along with his first in F minor, is finally making its way into the standard concert repertoire. It was clear that Sabine Meyer and Reine Wehle had performed this many times – in a good way. Often repeated performances of pieces turn them into stagnant renditions of familiar material, but in the Trio’s case, this meant that the total familiarity they had with the music created a natural, flowing performance, character bounding from the stage. 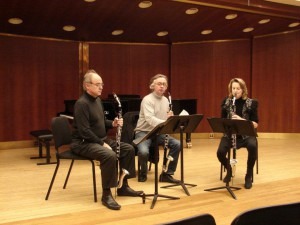 Next came a selection of movements from Bruch’s trio for viola, clarinet and piano, arranged to incorporate a basset horn played by Wolfgang Meyer. When playing with strings, balance can be a problem – and unfortunately here was no different. The basset horn, whilst uniquely beautiful, is not the loudest of instruments – perhaps one of the reasons for its decline into extinction. The basset horn was often covered by the piano and clarinet, including in the hands of Reine Wehle in the next piece, an adaptation of movements from Schumann’s 6 Studies in Canonic Form – but this seemed very much a problem with the instrument, rather than the performers. With this said, the Schumann had an incredibly natural flow, and when the balance worked, it really worked, showcasing Kalle Randalu’s sensitive and responsive accompaniment.

Sabine Meyer took to the stage next to perform a clarinet warhorse, Schumann’s Fantasiestücke. The intonation suffered slightly here, and whilst the performance was well-shaped, the duo could have explored more of the extremes Schumann has to offer; this piece is very beautiful on the surface, but hints at something a lot darker, more tormented.

The concert finished with the two Meyers performing Mendelssohn’s first Konzertstück, this one in F minor, Sabine on clarinet, Wolfgang on basset. The two Mendelssohns seemed to be the standout favourite for the audience; the not-too-long movements, the catchy themes and good distribution of lyrical and showy writing make them perfect for a lunchtime concert. The Trio di Clarone’s performance was engaging and lively, soliciting a chuckle or two from the audience in some of the outwardly virtuosic passages.

As I step back outside into the Real World, car horns honking and buses blazing past, I reflect on an extremely well-paced concert. The opening piece created in the audience an appetite that was finally quenched with the performance of the second Mendelssohn, the two bravura pieces framing delicate performances of other works in which the performers could explore the more sensitive sides of the basset-clarinet-piano combination.