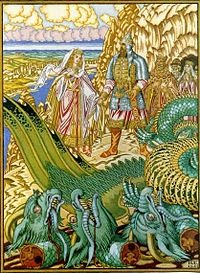 Alexander Grechaninov displayed prodigious musical talents at an early age. However, his father was a barely literate tradesman who expected his son to follow in his footsteps. Against the clear wishes of his father but with financial support from his sister-in-law, Alexander finally started piano lessons at age fourteen. A couple years later he enrolled at the Moscow Conservatory and began formal studies with Vasily Safonov and Sergey Taneyev. Following a disagreement over teaching assignments, Grechaninov moved to St. Petersburg and studied with Rimsky-Korsakov at the Conservatory. His compositions enjoyed early public success, and by 1894 he had completed his first symphony. Initially, Rimsky-Korsakov was not impressed. “It’s really not good! If someone, who has a natural inclination to compose in the style of Rubinstein and writes fairly well in this style, suddenly takes a fancy to Borodin and begins to compose in his style, it won’t work.”

Alexander Grechaninov: Symphony No. 1 in B minor, Op. 6

Rimsky-Korsakov’s unfavorable critique had serious consequences for the reception of Grechaninov’s orchestral compositions. Accused of harboring bourgeois, cosmopolitan and German tendencies, the symphonies were summarily rejected. Yet, these works are competently structured and steady flows of Russian thematic materials emerge in vivid orchestration. According to critics, Grechaninov’s first symphony “clearly lacks the fashionable primitive crudity of the dilettante Nationalists.” That primitive crudity, however, was originally encoded in a rustic “Scherzo” in 5/4 meter. On the advice of Rimsky-Korsakov, Grechaninov later replaced the “Scherzo” with a more orthodox and streamlined alternate movement. The Symphony No. 1 was first performed in 1895, the same year that saw the completion of the Cello Concerto Op. 8. Scored for a small orchestra with double winds, the work unfolds in a beautifully shaped single movement. 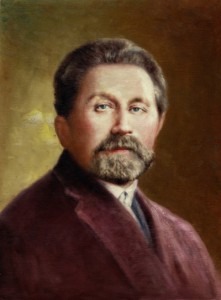 Grechaninov made an uneasy living teaching piano in St. Petersburg. Extreme poverty eventually forced him to return to Moscow in 1896. Over the next five years, he diligently worked on his first opera, Dobrinya Nikitich, to his own libretto. Dobrinya Nikitich is one of the most popular mythological knights from the Rurik dynasty. The hero undertakes and completes sensitive diplomatic missions for his prince Vladimir the Fair Sun. His most heroic task includes a three-day battle with the three-headed dragon Zmey Gorynych, who holds the niece of Prince Vladimir hostage on the Saracen Mountains. After a tremendous tussle, Dobrinya rather predictably manages to kill the dragon and rescues the fair maiden. Premiered at the Bolshoi on 27 October 1903, the opera was a fair success and resulted in an appointment at the ethnographic institute of Moscow University.

Composed in 1906, Grechaninov’s first Piano Trio is dedicated to his former teacher Sergey Taneyev. The passionate rhythmic urgency of the opening theme is beautifully contrasted by a melody of great tranquility. The harmonically ambiguous yet exceedingly lyrical slow movement gives way to a motoric and restless finale. This beautiful and ultimately musically satisfying composition clearly affirms scholarly opinions that “In the second half of the twentieth century, Grechaninov is the last living link with the traditional music of Great Russia.”