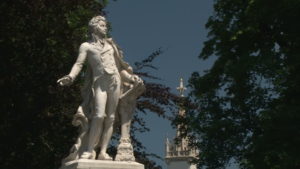 Peer pressure from dead people or following in the footsteps of greatness?

Classical music is swathed in tradition and culturally conditioned thinking. The traditions of concert-going, for example, are well-known (don’t applaud between movements, listen in reverential silence), and show little sign of relaxing, despite the best efforts of more forward-thinking musicians, ensembles and venues. Likewise, the score is regarded as the ‘sacred text’ of classical music wherein lies the composer’s ‘intentions’, and as such should be followed slavishly.

Composer-worship is the principal driver of performers’ willingness to subordinate their own creative freedom to enhance composers’
Daniel Leech-Wilkinson, Challenging Performance

The musician’s training is still largely about preserving tradition and the reverential “canonization” of repertoire: for the pianist, the “greats” of our repertoire are of course Bach, Mozart, Beethoven and Chopin, and the teaching of this music is littered with “shoulds” and “musts” and curious, long-held notions of what is deemed “authentic” or “correct” in our interpretation and performance of the music. Classical musicians are taught that there is, generally, one ‘proper’ performance of the score which honours the composer’s ‘intentions’. Anyone who steps outside what is considered to be the “norm” may be castigated for going against tradition, a maverick lacking respect, or simply “wrong”. Paradoxically, musicians are also encouraged to be creative and individual, to offer audiences something different or unique.

But where do these notions of tradition come from? In fact, many of the attitudes and practices of classical music were set down not that long ago, during the Romantic period, when musicologists, teachers and some musicians and composers decided it was time to formalise the artform to ensure it was treated with due respect, alongside some serious, quasi-religious composer-worship. It is no accident that the setting down of these “rules” about how music should be interpreted and performed coincided with the advent of recording, which allowed audiences and musicians to hear the music in a definitive performance multiple times. Today recordings have a highly significant role in the upholding of tradition in the interpretation and performance of classical music.


The weight of tradition can be stifling as musicians strive to conform to it. Enshrined in teaching and performance practice, and policed by teachers, critics, academics and even listeners, tradition can exert extraordinary pressure on musicians. It’s often safer to follow tradition, to do things as they have always been done, because stepping outside the norm, defying tradition, may not always be well received by audiences, critics or concert promoters, and may lead to loss of work.

But there’s the counter argument to this, that tradition can inspire and motivate, that it is, to quote Gustav Mahler, “not the worship of ashes, but the preservation of fire”, and that by preserving tradition we keep the artform alive. Thus, the musician is like a conservator or gardener, sharing the wisdom of the ages while also building upon it to create our own wisdom and knowledge for those who come next. Teachers in particular can have a significant role in this, passing down the wisdom from an earlier generation of pedagogues to the next generation.

Tradition can be a learning and research tool too because it is born out of an accumulation of wisdom. Musicians can refer back to earlier performance practice, for example, and use this to inform their own playing. In fact, in the traditions of performance practice, for example, each generation brings a slight shift in attitude and approach: exploring early recordings demonstrates this very clearly where familiar works are often played with a far greater flexibility of interpretation than we are used to now. The danger comes from regarding tradition as an absolute, without the imagination or creativity to explore alternatives.