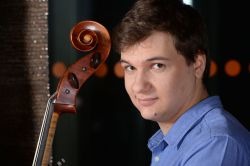 20-year old Romanian cellist Andrei Ioniță was awarded the Gold Medal in the cello section of the 2015 Tchaikovsky Competition. A laureate of many other competitions, he also took first prize at the Aram Khachaturian International Competition in 2013, and second place at both the ARD International Music Competition in Munich and the Emanuel Feuermann Competition in Berlin last year. I got in touch with him to talk both about his recent win and future plans.

Could you give us some idea of your background?

I was born in Bucharest, and studied there and then moved to Berlin, where I’ve been living for three years. I started with the piano when I was 5 years old, then switched three years later to cello, which became my ‘first love’!

How was your experience of the Tchaikovsky Competition? What are your views on competitions in general?

It was the most intense competition experience I’ve ever had, and I believe the other competitors would agree with me as well. It’s not necessarily the pressure from outside, from the jury, from the possibility of either winning or losing, from all the cameras or the thousands of people watching and following you. I would say that the pressure mostly comes from the inside – it becomes a battle with your own demons, with your fears, your pride.

By the end, I simply felt honoured to be able to play Tchaikovsky and Shostakovich’s music in their hometown. In the second round, for example, I was so overwhelmed while performing the Shostakovich Cello Sonata that I almost had a breakdown – I started crying on stage for the first time in my life. I looked at the audience’s impressions and I felt that I was in the right place, at the right time, to tell my story and the composer’s story… The public’s response was unbelievably supportive, and from that point on I didn’t care anymore about the prize – I knew that my duty as an artist had been fulfilled.

Competitions can become a way of ‘artificial selection’, instead of the natural one, which comes anyway as time passes by. But they are of course an incredible platform for young artists and I’m grateful for having taken part. 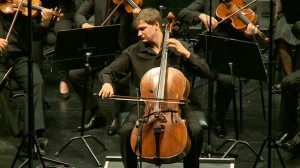 What are your plans for the near future? Do you have any particular repertoire you would like to explore?

I’ve been overwhelmed with the amount of concert invitations I received after the competition. My schedule at least for the next season is really full – St. Petersburg, London, Munich, Berlin, probably even concerts in Korea or Carnegie Hall, and the invitations still keep coming. I hope I can figure out what’s best for me and choose wisely. Regarding repertoire, I can say that Slavic culture, and particularly Russian music, are close to my heart – although my mother language is a Romance one, culturally speaking I feel I can relate easily to the Slavic fire and range of emotions. I like to explore though any sort of repertoire, from any period or place. One of my dreams for the future is to develop myself in as many musical fields as possible, perhaps bringing my piano playing at the highest level possible or – why not – even conducting!

Which other musicians, especially cellists, do you admire?

Although I don’t like to idolize other fellow musicians, I still admire a lot of my childhood heroes. I also appreciate cellists such as Daniil Shafran or Steven Isserlis, with whom I also had the chance to play chamber music last year – that was a special experience for me.

Do you have any interests outside of music?

I am really interested in natural sciences, especially physics. I am also passionate about philosophy, but once you start questioning yourself and the world around you, it really gets scary… Luckily, there are always good friends to keep me in a good mood!