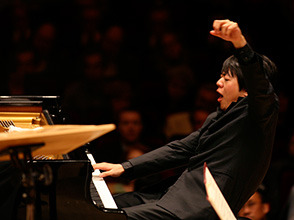 Recently pianist Lang Lang played a recital to a packed house. Nature called. He left the stage to pee. Hundreds of spectators started to leave thinking the concert was over. Lang Lang soon came back to the diminishing numbers in the theater. “I’m not done playing yet! he said. “I was just going to the toilet!”

“Thank God for those who had the patience to wait for his return from the loo,” an audience member commented, “He signed autographs, made selfies and MOST importantly threw his t-shirt to the public. That’s the sign of a true artist.”

The French language caused an ill-advised comment at a recent performance. Just prior to a concert by the Orchestre de Paris, and long after the death of composer Claude Debussy, two audience members conversed in French. A man asked his seatmate what was on the program. She exclaimed, “Oh, voilà, La Mer de Debussy.” (“Oh, there is Debussy’s The Sea.”) Another concertgoer, a classical music novice but one who knew of Debussy’s fame, overheard. She jumped up out of her seat expecting a celebrity-sighting causing quite a stir. “Où, où?” (“where, where?”) The eavesdropper thought she’d heard, “Oh, voilà la mère de Debussy.” (“Oh, there is Debussy’s mother.”)

I suppose the following would be in that category too:
Q: What’s on this evening?
A: Giselle (a romantic ballet)
Q: She’s ill? What’s the matter with her?
Sometimes audiences get personal with their comments.

Stage lighting is bright so we can adequately see our music. The lights get very hot and let me remind you that we are dressed in tails and long black dresses. Invariably someone remarks, “Why did you sweat so much? You must have been very nervous!”

A colleague, who was sensitive about his premature baldness, usually wore hats. But he couldn’t wear a hat on stage. Needless to say he was not amused by the comment (heard more than once), “I didn’t know you were bald,” He finally came up with a retort. “I lost all my hair in one night—when my EX girlfriend tossed my instrument through a window.”

Sometimes they are piqued.

Ken Huber, a pianist friend, shared this anecdote. An orchestra was playing Tchaikovsky’s Sixth Symphony. After the rousing third movement there was wild applause. The piece wasn’t done yet. It also has a fourth movement—highly charged, emotional and slow, which ends the work. The musicians are so accustomed to people making this mistake and clapping early that we usually burst into spontaneous cheering too when we rehearse it—much to the amusement of several guest conductors. Unfortunately a listener in the audience got up to leave, thinking the symphony was over, annoying those seated nearby. Several people hissed at him, “Sit down and stop applauding. We can’t hear the lush sounds of the slow movement.” In a huff he remarked, “Well the last time I heard THIS symphony, it did NOT have four movements!” Too bad he missed it. Trombone players are huge fans of the ending of this symphony. It has an absolutely breathtaking low brass chorale—one of the greatest passages for trombones of the symphonic repertoire.

Sometimes audiences are in a big hurry after a concert.

We call it the “standing evacuation.”

But our least favorite comment wins hands down, “Must be nice to sit on stage and play. And you get paid for that?” Artistic improvement is achieved through thousands of hours of active practicing, observing and learning. To become proficient in any creative endeavor it is said that it takes 10,000 hours of deliberate practice. Assuming that a musician practices 4 hours a day 300 days of the year, which totals 1,200 hours of practicing according to my calculations, a musician would become proficient in 8 years. But many of us including me, have spent decades practicing, often over 4 hours a day. Practicing continues every day throughout our careers. (Perhaps you know the adage, “if you don’t practice one day you know it; two days the conductor knows it; and three days the audience knows it!”)

Like athletes we get out of shape quickly, and like writers we are constantly striving and refining to execute the perfect phrase, nuance, shape, expression, rhythm, and color of every passage.

But don’t get me wrong. Even though there are sometimes misunderstandings and ill-advised comments, musicians believe that the music isn’t complete without an audience. Contrary to what Alfred Hitchcock said, “Always make the audience suffer as much as possible,” the impact we hope to make is to evoke an emotional response from the audience so that perhaps their hopes and dreams go somewhere, preferably where they haven’t been before or cannot go alone.