In the quest for ever more precise measures of time, German inventor Johann Maelzel perfected an earlier invention and created the metronome, a machine with which musicians could regulate their speed. For composers, it meant that they could move away from traditional but undefined annotations such as “Allegro” or “Allegro molto” and specify the exact speed they wanted.

For Beethoven, who had exacting ideas about tempo, the metronome was what he needed to convey his compositional decisions. In fact, in a letter written in 1817, Beethoven declared “So far as I am myself concerned, I have long purposed giving up those inconsistent terms allegro, andante, adagio, and presto; and Maelzel’s metronome furnishes us with the best opportunity of doing so. I here pledge myself no longer to make use of them in any of my new compositions.” And when we look at the score for the Hammerklavier Sonata, written in 1818, we start with this annotation: “Maelzel’s Metronom [half note] = 138.” It may be, then, the publisher who added “Allegro” for those people who didn’t own a metronome. Since an Allegro can vary between 120 and 168 beats per minute, we can see immediately what appealed to Beethoven in being able to say exactly what he needed.

Over time, Beethoven’s metronome markings were largely disregarded. For many people, they just felt “too fast” and various conditions were blamed: perhaps Beethoven’s own metronome was defective or perhaps his increasing deafness was the problem. In many editions after the death of Beethoven, the metronome markings were actually omitted. Starting in the late 20th century, however, the markings were re-examined and tradition was thrown out the window. Accordingly, new ideas about the speed of Beethoven resulted, often making his music sound newly innovative and daring to our old tired ears. 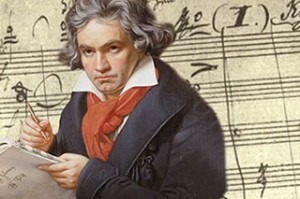 The conductor Roger Norrington took on the Beethoven symphonies and had to rethink them from the beginning, saying that he “needed to choose the right number of players for Beethoven’s time, the right seating plan so that the music sounded as it was meant to on stage, and to research the articulation and phrasing that contemporary players would have used as they moved from Haydn to the challenge of Beethoven.” Norrington made two important recording sets of the Beethoven symphonies: one with the London Classical Players using 19th century instruments and one with the Stuttgart Radio Symphony Orchestra on modern instruments. Because the same research lay behind both performances, the outcome wasn’t greatly different.

Check your own ears. The first two recordings here are Norrington’s newly researched performances and the third one is an in-hall recording from 1987 by the celebrated conductor Sergiu Celibidache.