What could be more ideal for showing the supernatural world than opera? The most famous supernatural scene in opera occurs in Weber’s Der Freischütz. The opera, known in English as ‘The Marksman,’ is about a poor woodsman, Max, who, in order to win the hand of his beloved Agathe, must win a shooting contest. On the first day of the contest, he fails. In danger of losing both his job and his girl, Max takes advice from Caspar and learns about a mystical ceremony they can do in the Wolf’s Glen – the bullets they cast there will guarantee Max a victory. Unbeknownst to Max, Caspar has another plan he’s working on – he’s pledged his soul to the devil who will come to collect it in a few days, unless he can find someone else’s soul for the devil to collect instead – and he has plans for Max’s beloved Agathe’s soul.

The music for the Wolf’s Glen scene begins with quiet string tremolos and low trombones, an instrument traditionally associated with devilish doings. Ghostly voices sound. Caspar and Max prepare 7 bullets – 3 for Caspar to use, 3 for Max to use, and one extra, which Caspar intends for Agathe. As each bullet is created, new horrors appear: evil birds, a hurricane, a wild hunt, a thunderstorm with meteors and fire, and, for the casting of the last bullet, the devil Samiel appears.

Throughout the scene, the violins maintain a skittery presence while the low strings and brass do their part to emphasize the dark dealings happening on stage. Finally, with a roll of timpani, Samiel himself appears, and the last bullet is to be directed by Samiel at Agathe. 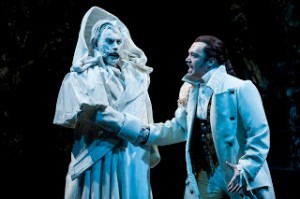 The Wolf’s Glen scene remains one of the most powerful devilish scenes in opera – but it’s not the only one. The dinner scene in Don Giovanni is another, where the Stone Guest drags the unrepentant seducer into the hellish depths – with his icy-cold handshake, the Commendatore gets a deathly grip on Don Giovanni and never lets him go.

Beginning with the dramatic opening chords, this scene is set up for the fatal ending. The Commendatore tells Don Giovanni to repent, which he refuses to do, while the background, Don Giovanni’s servant, Leporello, keeps up a frightened commentary. As the end approaches, devilish chanting from below signals the beginning of the end.

And at the end, with a frightful scream, Don Giovanni is dragged down to the depths…and so go most opera characters who deal with the devil.