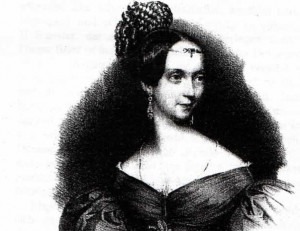 Painting by Wilhelm Henselt, husband of Fanny Mendelssohn, probably in 1839.

On his way to Italy, Felix Mendelssohn (1809-1847) visited the Bavarian capital Munich between June and August 1830. One evening, he performed with the clarinetist Heinrich Bärmann at the home of Heinrich Sigmund von Kerstorf. Following the performance, Mendelssohn once again met Delphine von Schauroth. They had first encountered each other in Paris, in 1825. At the tender age of seven, Delphine took piano lessons from the Parisian virtuoso Friedrich Kalkbrenner, and two years later appeared in her first public recital. Additional concerts soon followed, and at a private soiree at the home of Baron Trémont in March 1825, the eleven-year old Delphine performed for Felix Mendelssohn. He wrote to his sister Fanny “Heard a lot of music, much of it bad…meet Onslow, Vidal, Boely and a young pianist, Mlle Schauroth”. However, by 1830, things had changed considerably. Delphine had not only developed into an exceptionally gifted pianist—but now aged sixteen—had also grown into a stunningly beautiful woman.

In a letter to his sister Fanny, Felix describes her as “an artist, and very cultured, whom everyone adores. Ministers and Counts trot around her like domestic animals in the hen yard; artists, too, and other cultivated persons.” Although Mendelssohn assured his sister that he did not have any particular feelings for her, the letters he wrote to his friends Karl Klingemann in London and Heinrich Bärmann in Munich clearly disclose that he had fallen passionately in love with Delphine. In fact, he visited her house for extended periods at least twice a week, and sheepishly reports that they made music by playing duets on the piano. Since polite societies in the 19th century consistently used duet playing as a euphemism for passionate sexual activity—not necessarily including sexual intercourse—we can nevertheless assume that Mendelssohn happily dispersed some of his nervous energy. In due course, he made a formal request to Delphine’s mother, asking for permission to marry her daughter. Mutti Schauroth, deeply concerned with her daughter’s budding career and also aware of the impromptu non-musical duets, apparently sought to delay a formal wedding, and Mendelssohn hastily departed for Italy.

Once he arrived in Venice, and surrounded by the rocking and rhythmic motions of Venetian gondolas, his thoughts inevitably returned to Delphine. On 16 October 1830, he composed a “Venetianisches Gondellied”—which would become part of his first collection of “Songs without Words”—and inscribed a dedication to Delphine in the margins of the manuscript. Although no correspondence has survived, the lovers presumably stayed in touch. Upon his return to Munich in October 1831, Mendelssohn quickly reestablished contact with Delphine, but things had cooled considerably. Mendelssohn now used his energy—at least the creative bits—to finish his Piano Concerto No. 1 in G minor, Op. 25 in a mere three days. Confiding in his sister Fanny, and once more assuring her that he did not love that woman, Mendelssohn reports “Delphine has composed a passage for this work that makes a startling effect”. However, Mendelssohn never communicated which particular passage emanated from Delphine’s quill. Could it be part of the transitional section—a trumpet fanfare gingerly echoed by the soloist that provides the seamless connection to the “Andante” movement, or possibly the return of the melancholy theme from the opening movement at the end of the final movement that provides the musical and emotional bond for the work? We may never know for sure, but after Mendelssohn had given the premiere of the work on 17 October 1831, the couple unceremoniously separated. Maybe Delphine no longer wished to entertain his conceited aloofness or she had been frightened by one of his frequent and alarming fits of temper. Be that as it may, Mendelssohn apparently did experience a good deal of guilt, because when they saw each other again a couple of years later in London, he failed to get in touch. By 1837 Mendelssohn was married to Cécile Jeanrenaud, and Delphine wedded in succession the English clergyman Edwin Hill-Handley, Stephan Freiherr Henning von Eberg and Edward Knight.