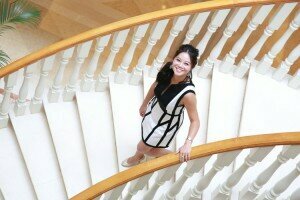 A different kind of album came to our attention the other day – a new recording by Hong Kong pianist Jacqueline Leung, In Sunshine or In Shadow. Instead of the usual compilation of the usual stalwarts of the piano world, Ms. Leung looked at music as ‘ear candy.’ The phrase came from a friend after hearing her play Saint-Saëns’ The Swan. She loved the familiar tune and it inspired Ms. Leung to search for other interesting melodies.

The album opens with a piece that, once upon a time, would fall into the genre of ‘light classical’ music. Eric Coates’ By The Sleepy Lagoon is familiar to many as the theme to the long-running BBC Radio show, Desert Island Discs. In playing this piano version of the piece for orchestra, the goal is to make those moonlit waters flow and Ms. Leung spoke about how, despite the surface ease of the music, maintaining the liquid feeling took hard work.

Coates: By the Sleepy Lagoon
Other choices on the album are even less obvious: Federico Longás’ hymn to the beauties of Spain, Aragón. Longás, a student of Enrique Granados, carries his master’s style forward in this 1935 work that he originally dedicated to Vladimir Horowitz. Percy Grainger’s Irish Tune from County Derry, brought the familiar Danny Boy to an international audience.
Longás: Aragón
And then we get to the ultimate melodist: Mozart. His Duport Variations, K. 573, starts with a simple minuet, but mixes it in with theme and variations, a technique rarely used with this kind of dance music, and we have a simple and beautiful melody presented with 9 variations.

Mozart: 9 Variations on a Minuet by Duport, K. 573
The album includes some Liszt and some Bach, as well as less-well-known composers such as York Bowen (Prelude in E flat major, Op. 102/7), Nikolai Kapustin and his pop-y Toccata, Op. 36.

Kapustin: Toccata
The album was funded by a successful Kickstarter campaign and all donors are thanked by name in the programme booklet.

Ms. Leung started her music studies at Wells Cathedral School before attending the Royal Academy of Music London. She received her MM in piano performance from Texas Christian University and then returned home to teach music at Diocesan Girls’ School, where her choir was declared Best Girls Choir in Hong Kong. For the past decade, she’s devoted herself to playing piano at festivals, giving seminars around Asia, plays in chamber music ensembles, and adjudicates at music contests. To keep her brain going, she also did an MA in Comparative Literature at the University of Hong Kong. She now teaches piano and chamber music at United International College in Zhuhai, China.

Her spare time is spent in the countryside around her home on Lantau Island, reading, and cooking, with a particular hobby of scouring bookstores around the world for cookbooks for her collection.

In Sunshine or In Shadow took as its goal the creation of an album of melodies and, in combining music from different genres, she’s been entirely successful in this lovely little gem.

In Sunshine or In Shadow was recorded in Vienna under record label Hello Stage.