In Tune Society
The Horrors of War: Composers and Picasso’s Guernica
by Maureen Buja March 6th, 2022

The picture was Picasso’s response to the bombing of the Basque city of Guernica, which killed around 300 people. This was the first war-time bombing of civilians and became an international horror. Picasso, in Paris, took up his brush and using a limited palette of black, grey, and white – both signaling mourning for the victims and echoing the tonal colours of the newspapers reporting the atrocity – used both cubism and surrealism to portray the horrors of war.

A horse has been gored and is screaming, matched by the screaming women, a dead baby, a dismembered soldier, and a bull. The chaos on the ground, all happening in a single room beneath an overhead light, shames us for standing powerlessly by. 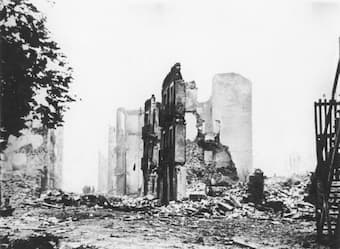 Guernica after the bombing, 1937

The city was bombed by the Nazi German Luftwaffe’s Condor Legion and the Fascist Italian Aviazione Legionaria, at the invitation of Francisco Franco’s rebel Nationalist faction. The city was the heart of the Basque province of Biscay and symbolic as the center for Basque liberties. It also stood between Franco’s army and important city of Bilbao. The day of the bombing was a market day – the regular population of the town of 7,000 swelled to more than 10,000 people. The bombing started at 4:30 in the afternoon and resumed at 6:30 pm, moving north to south. The Nationalists took the town easily three days after the bombing.

The effect on the world was immediate. News hit London in The Times 2 days later and was the first indication of the absence of Germany’s declared neutrality in the Spanish conflict. The Times report was syndicated internationally and sparked widespread shock and outage. 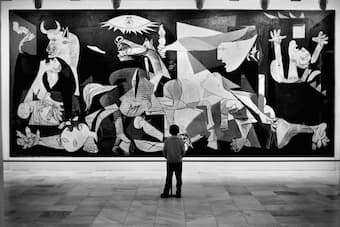 Guernica at the Reina Sofia Museum with a child for size

Picasso had been commissioned by the Spanish Republican Government for a piece for the Spanish pavilion at the International Exposition in Paris. After he heard about the bombing of the city, Picasso decided to make it the focus of his commission. He worked for two months on the work, starting with a piece of unbleached muslin that was so large he had to stand on a ladder to reach the furthest corners with a brush on a long handle.

Upon its unveiling at the Paris Exhibition, it received little interest. Many objected not to the subject matter but the style in which it was presented. It was faulted for not offering a vision of a better future. After the Expo, the painting toured Europe and then went to America, where it was used to raise funds for the Spanish refugees following Franco’s victory in Spain. Picasso used it as a political statement when he said that it would remain in the US and not return to Spain ‘until liberty and democracy had been established in the country.’ It was returned in 1981 with the establishment of the current monarchy.

Many composers have taken up the ideas of Guernica for their music either because of the effect the painting had on them or because of their own war experiences and how they wanted to make their own anti-war compositions.

Leonardo Balada’s Guernica for orchestra, composed in 1966, was based both on Picasso’s work and his own experiences in the Spanish Civil War.


Fredrick Kaufmann’s 2011 Guernica Piano Concerto. The first movement’s The Tragedy of Guernica is followed by II. Mourning and III. Resurrection. In addition to having seen the Picasso painting, Kaufman also brings in his own experience as a veteran of war in the Middle East.


Walter Steffens opens his Guernica with the sounds of approaching airplanes and an air raid siren, even going so far as to add bombers into his score.


Maximo Diego Pujol excerpted the different actions of the painting to create each movement of his work. The titles of the movements:

Just as Picasso used cubism to flatten the plane of the painting, so Pujol composes this work in polytonality, presenting two tonalities from two different sound planes simultaneously. 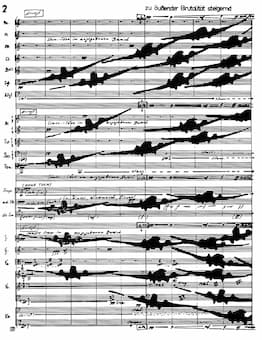 These are just a few of the works based on Picasso’s painting. We’ll close, however, with a work that pre-dates the war and its troubles. Joaquin Turina’s 2 Danzas sobre temas populares espanoles (2 Dances on Traditional Spanish Themes), Op. 41, date from 1926. In the second dance, the focus is Basque folk music and a characteristic 5/8 time signature of the Basque zorico dance.

The Tree of Guernica / tree of Gernika / Gernikako Arbola is an oak tree that symbolizes tradtional freedoms for the Bascayan people and, by extention, for the entirety of the Basque peoples. The first tree was planted in the 14th century and the third tree survived the 1937 bombing. The current, fifth tree, was planted in 2015.