Artists Behind the scenes
The Great Concert Halls — My Visceral Reactions to Them
by Janet Horvath February 9th, 2014 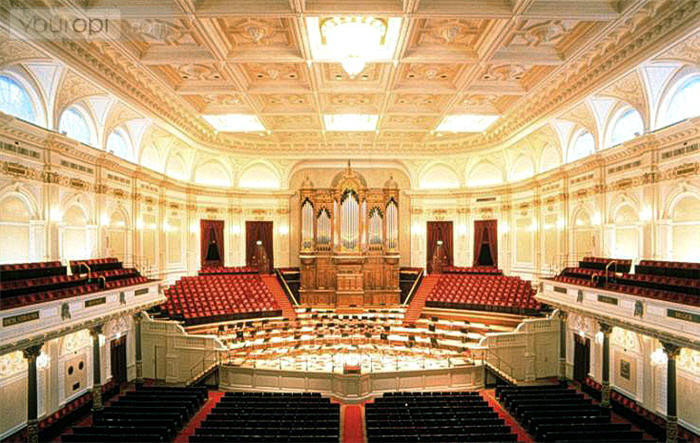 Barber Concerto for Violin and Orchestra Op.14
Isaac Stern
New York Philharmonic
Leonard Bernstein
I have been fortunate to perform in some of the world’s greatest concert halls. It’s difficult to choose favorites but I will—four international venues, two historical and two modern— Musikverein in Vienna, Austria, Sydney Opera House in Sydney, Australia, the Philharmonie in Berlin, Germany and Concertgebouw in Amsterdam, The Netherlands.

When one enters the Musikverein’s Großer Musikvereinssaal, (large hall) or Golden Hall, one’s breath is taken away by the splendor of the fifty glided and full sized female busts surrounding the theater. Gold adorns everything—the ceiling’s allegorical paintings are encased in gold and the balconies, the walls, the onstage organ and the stained glass windows in the uppermost balconies are all gilded. Eight teardrop chandeliers hang from the ceiling. Inaugurated in 1870, it attains the intimacy of the music room of royalty. The hall has only 1,744 seats with standing room for 300—quite small by today’s standards. The acoustics are as splendid as is the visually stunning décor. 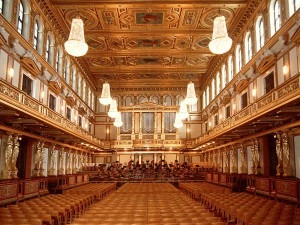 As a musician, performing on this stage is like reaching heaven. The sound is buttery soft, warm and rich. The hall is rectangular in shape, making the sound direct, clear and immediate, but since the ceilings are so high there is a reverberation of about two seconds, which adds to the warmth of the sound.
There is no backstage to speak of so one mingles with the audience. The stage is so small that I had virtually nowhere to place my feet and I felt that the people in the first rows were onstage too. Similarly, the seats in the audience are tightly packed like sardines—no extra padding to absorb the sound! The instrument trunks have to be scattered throughout the catacombs below the stage as space is at such a premium.
It gave me shivers to be on the stage where the world premieres of Brahms’ Symphony No. 2 and 3, Tchaikovsky’s Violin Concerto and Bruckner’s Symphony No. 8 took place and where Mahler conducted, as well as all the greatest performers and conductors since. The cherished tradition of live broadcasts of the Vienna Philharmonic’s annual New Year’s performances are from the Musikverein. I’ve performed several times there, but I’ll never forget our performance of Sibelius Symphony No. 2. The eager anticipation I experience whenever I approach the stately rose-colored building is unparalleled. 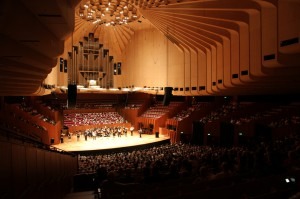 Sydney Opera House is an architectural marvel. I had a visceral emotional reaction to the structure that I usually only experience while viewing a great piece of art or perform or hear a masterpiece. No question—it’s in that category. Danish architect Jørn Utzon was selected as the winner of an international design competition in 1957, for his distinctive creation. The public spaces are open to the ocean and the unique design emulates seashells. Sadly, the opera house didn’t formally open until October 1973 due to scandals involving changes in Utzon’s original designs and budgetary considerations. Nothing as complex had ever been attempted before.
The Sydney Opera House was one of the first attempts at computer-aided design opening the way for complex geometrical designs in modern architecture. The project was completed ten years late and more than fourteen times over budget, during political change that resulted in a lack of support for the project from government officials and eventually causing Utzon to resign. Despite the scandal, the Opera House, which comprises multiple performance venues, is one of the busiest halls in the world with over 1,500 performances each year housing Opera Australia, the Australian Ballet, the Sydney Theater Company and The Sydney Symphony. Seven million people visit the Opera House every year, and over a million people attend performances. Named a UNESCO World Heritage Site in 2007, it is one of the most distinctive structures in the world.
Playing on that stage was dizzying! There was an elaborate series of levels so that the audience could see every performer (and we them!) The audience seats rise precipitously in boxes along the sides hugging the shell shaped walls. It was a thrill to be inside the building and I remember being lost in the maze of hallways backstage. Behind the performers is the impressive Grand Organ— a unique instrument with 10,500 pipes, of which 2700 can be sounded simultaneously. It is the world’s largest mechanical tracker action pipe organ. Subsequently we took a boat ride to get a full view of the magnificent structure from a distance—amazing. 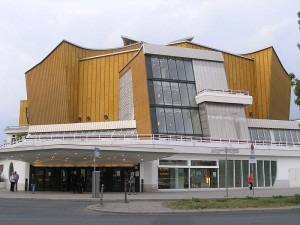 The Philharmonie is the home of the Berlin Philharmonic. Once when the Minnesota Orchestra performed there the Berlin Philharmonic was rehearsing and we were able to hear them, mingle with them and then have their orchestra hear ours. This is always a great learning experience for musicians. Of course what stood out for us was the full service restaurant and lounge area backstage exclusively for the musicians, complete with beer! During busy performance and rehearsal days food is available so no one has to race out in search of a meal at odd hours. We envied the numerous spaces for musicians to warm up and practice.
The building is acclaimed for both its acoustics and its architecture. Asymmetrical, with the appearance of a tent, the main concert hall is in the shape of a pentagon—having five angles and five sides. No hiding on this stage, even for the conductor, as it is in the center of the hall with seats surrounding it, rising and terraced irregularly on all sides and behind the orchestra so that everyone in the audience has a great view. The Philharmonie’s “vineyard-style” seating was subsequently imitated as a model for other concert halls such as the Sydney Opera House, Denver’s Boettcher Concert Hall, the Gewandhaus in Leipzig and Walt Disney Concert Hall in Los Angeles. The Philharmonie is highly regarded for the quality of its acoustics. We played a memorable performance of Barber’s Violin Concerto with Joshua Bell there.
Amsterdam’s stately Concertgebouw is in a class by itself. The interior is a delicious shade of cream with gold bas-reliefs and bright red seating with red velvet drapery separating the public spaces and the hall. Around the balconies are imprinted the names of all the most famous composers in gold letters. Beautiful chandeliers contribute to the brightness and warmth of the hall. The floors are simple wood, which enhances the wonderful lush sound that emanates. The Concertgebouw opened in 1888 and the main hall seats 1,974, again smaller than is typical today. What is totally unique about this hall is that the conductor and soloist must descend a long red-carpeted staircase through the audience that is behind and above the orchestra to make their grand entrance from the clouds as it were. I would worry about tripping. For each curtain call they must ascend and descend getting plenty of exercise in the process! The stage is quite diminutive and here too I remember no space for my feet and barely enough room to bow during Beethoven’s Symphony No. 3 “Eroica” but the sound was quite unforgettable. Experience this hall by watching the virtual tour below.
I am fortunate to have played in so many exemplary halls. Performing in different halls and experiencing different acoustics as well as comparing ourselves to international orchestras and audiences stimulate musicians to grow artistically.
http://www.panotours.asia/pt/nl/concertgebouw/