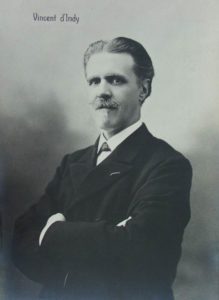 Vincent d’Indy (1851-1931) was considered by Gabriel Fauré as ‘The Samson of Music,’ not only for his work as a composer and conductor but also for his work as an educator and propagandist for French music. He followed his teacher César Franck as leader of the Schola Cantorum and numbered among his pupils composers as different as Erik Satie and Albert Roussel. He was important for the revival of the music of Monteverdi and Rameau, through their operas, and was himself an important composer of operas and orchestral and chamber works.

His Tableaux du voyage for orchestra (1892) was a reduction of the 13-part original for piano (1889). The theme came from a series of hiking trips he had taken through Germany’s Black Forest and Tyrol regions.

The Préambule starts in the minor, which seems scarcely a happy foreboding of his trip. Clouds of danger seem to assemble in the atmospheric string and wind sections.

Once he’s ‘en marche,’ on the road, however, things become happier. A syncopated folksong is the basis for his movement and the rising melodic line could be the road rising before him or the summer sky overhead.

The sombre third movement has the title of ‘the knell’ (le glas), the sound of funereal bells. The feeling shades toward the dark and solemn sound of low winds and strings. You can almost hear the falling tears of the mourners. At the very end, the dark harmonies from the first movement, the Préamble, return, thus explaining the darkness of the opening.

The Green Lake returns us to peace with a lullaby-like woodwind melody.

When we think of The Post, we often think of Schubert’s evocation of it in Winterreise. The horn calls and the wheels turn in the strings. The strings carry us off to the final movement with one last horn call.

We close with Dream. The dark harmonies of the beginning return, made even darker by use of the horns, trombones and cellos. However, we look back, via the themes from Le Glas and Lac Vert and it’s as though we’ve come to the realization that the trip was darker than we’d thought when we were in the middle of it.

The work marked an important development in French music composition. The orchestral effects control feeling of both the atmosphere (Préamble) and the images (La poste) of the traveller. The picture of his trip isn’t the sunny one we might expect from the title. This is a work of reflection and maturity and captures, particularly in the final movement, the aspect of memory of the traveller, rather than merely a picture of world he saw.