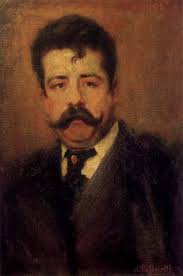 Destitute and on the verge of starving, Ruggero Leoncavallo (1857-1919) arrived in Paris. He found work as an accompanist at various café-concerts, and eventually attracted attention. Colloquially known as the “great little Italian,” he gradually gained entry into the various salons of the city. In March 1888, he was at a reception hosted by Countess Marie de Guerne for the Brazilian Emperor Don Pedro II. He also was seen at the salon of Princess Ruspoli, which he described as “one of the most brilliant and appreciated in the artistic and literary world of Paris.” And then there was Madame Benardaky, “a Russian who sang very well in Italian and who was passionately interested in music.” Benardaky was “statuesque and beautiful and cared for nothing but champagne and love,” he recalled. Leoncavallo rubbed shoulders with Ambroise Thomas, Jean-Baptiste Fauré and Charles Gounod. It was said that Gounod, who possessed a beautiful singing voice, fell head over heels in love with the “proportions” of a singer whom Leoncavallo accompanied. Apparently, her singing was absolute dreadful, but her slender figure made up for any shortcomings. And it was in this fertile environment that Leoncavallo met his future wife, Marie Rose Jean. 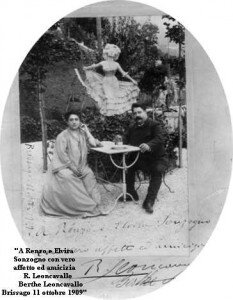 Marie Rose Jean was described as “a twenty year old from Marseilles, who was interested in making her debut at the Opéra Comique.” She quickly became Leoncavallo’s “preferred student,” and history remembers her as “Berthe Rambaud.” She was probably illegitimate, and took the name “Rambaud” to lend credence to the fact that she was an offspring of her mother’s marriage to Pierre Rambaud. Confusion of name notwithstanding, we do know that she was born in Carpentras in August of 1863. By all accounts, she was quite attractive in her early years, “with dark brown hair and large eyes. Dressed elegantly in photos, she exuded an abundance of youthful charm, and it is easy to understand why Leoncavallo felt attracted to her.” And of course, she was a trained soprano. We know preciously little about their relationship, but do know that they tied the knot in 1888. Apparently, the couple had no children but Berthe brought an eight-year-old girl by the name of Jeanne Puel into the relationship. Leoncavallo never adopted Jeanne, but she did receive the rights to his estate following Berthe’s death. 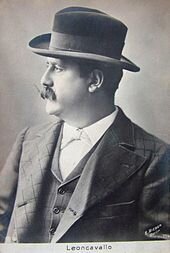 In her later years, Berthe was unflatteringly described as “short of stature like her husband and inclined to obesity,” and that she “made a matronly impression for most of her life.” It has also been suggested that she was probably not particularly well educated, as she made some rather awkward decisions regarding the Leoncavallo estate. Around the time of first meeting Berthe, Leoncavallo also met the young American soprano Sybil Sanderson at a party in Paris. He was stunned by her “beautiful and proud appearance,” and although he considered her talents extraordinary, suggested that her voice was still in need of further training. Clearly, Sanderson had not expected, or was not used to, such a curt reaction and brusquely walked away. Apparently, she did heed Leoncavallo’s advice and attended the Paris Conservatoire, at least for a short period of time. Sanderson did ask for Leoncavallo’s help in introducing her to Massenet, who was desperately searching for a new “Manon” after his favorite interpreter Marie Heilbron had died. Sanderson subsequently became Massenet’s favorite artist, and he wrote Esclarmonde to showcase her talents. 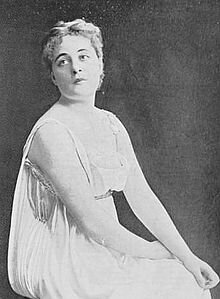 Leoncavallo has been described as a man of enormous paradox. His biographer writes, “He was warm and gregarious, emotional, childlike, ambitious, idealistic, melancholic, soft-spoken, cosmopolitan, modest, sensitive, dedicated, hardworking, helpful, and humorous. But he could also be two-faced, gossipy, opportunistic, litigious, naïve, megalomaniacal and petty. He frequently lied about himself, quickly adopted other people’s ideas, quarreled with colleagues, played one publisher against the next, and was hopelessly inadequate in financial matters.” But he was a supremely gifted artist, independent and ambitious, who stayed true to his artistic vision no matter what.