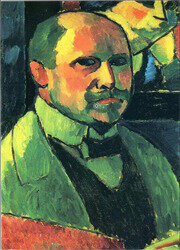 Last month’s article focused on the impact of the Great War on musicians, artists and writers in France –today I will focus on its impact in Germany and Austria.

During the period leading up to the war, many intellectuals, artists, musicians and writers in Germany and Austria supported the prospect of war as proud patriots, and like their French counterparts, volunteered for military service in astonishing numbers. However, the regimes of the dual Austro-Hungarian monarchy, with its aging Emperor Franz-Joseph – which had on one hand its ‘Biedermeier’ (“ordinary, simple citizen”) mentality and on the other, the ‘Ringstreet’s’ pompous grandeur (see my previous article on the Secession in Vienna) — and the Prussian militaristic, extremely class-conscious society around Kaiser Wilhelm in Germany, were seen by most of the intellectuals and artists as corrupt, stultified and outdated. Thus there was an anti-monarchical/anti-institutional component to their orientation, unlike in republican France. Many of their publications, such as ‘Die Jungen’ (The Young Ones) in Vienna and ‘Der Sturm’ (The Storm) in Berlin expressed these sentiments, in which war was seen as catharsis, liberating language and art. Even one of the most respected literary authorities in Europe at the time, Thomas Mann, said ‘that the hearts of poets were inflamed as soon as war was declared’. Words like, ‘fatherland’, ‘battle’, ‘war’, ‘action’ became part of the vocabulary of various art associations and of the younger generation in revolt against their elders, demanding new artistic freedom and expression, a remake of society. These sentiments were not only expressed in Austria and Germany, but they also found their counterparts in Russia with the ‘Acmeism’ (Akhmatova and Mandelstam) and the ‘Constructivsm’ and ‘Suprematism’ movements around Malevich, Popova and many others, which also welcomed the ‘revolution’ as a possibility for the creation of a ‘new’ man, a ‘new’ society. In Italy similar calls came from the ‘Futurist’ movement around Marinetti, Boccioni, Balla and Severini. All wished for liberation — their battle cry: ‘out with the old order and in with the new’ — and so in 1914, they thought that war provided the impetus for just such a change.

In 1911, Franz Marc, August Macke, Ludwig Kirchner, Gabriele Münter had founded ‘Der Blaue Reiter’ (a group of German Expressionist painters) along with the Russians Alexey von Jawlensky and Wassily Kandinsky. The composer Arnold Schönberg had met Kandinsky earlier that year; the two became very close friends, inspiring each other’s work. Four of Schönberg’s own paintings were shown with the Blaue Reiter group, and Kandinsky created his ‘Impression III’ painting after hearing Schönberg’s compositions ‘Pierrot Lunaire’ and ‘Gurre Lieder’. The Blaue Reiter association dissolved with the outbreak of the war in 1914. Now classified as enemy aliens, Jawlensky and Kandinsky had to leave Germany — Kandinsky first left for Russia and then for neutral Switzerland. Many other artists and intellectuals who opposed the war, such as Hermann Hesse, Albert Einstein, Stefan Zweig, Franz Werfel, Else Lasker-Schüler amongst others, had also sought refuge in Switzerland, which had become not only a haven for the opponents of the war, but also home to the supporters of the International Peace Movement, in concert with the activities of the French pacifist, Romain Rolland.

The attitudes of many intellectuals and artists changed after their initial euphoria — once confronted by the horrendous slaughter in the trenches, the gas attacks and the many dead. Franz Marc and August Macke fought and died at Verdun, soon after they had been mobilized. Their paintings and letters to family members are testimony to their changing attitudes — Franz Marc’s pre-war painting ‘Blue Horses’, harmonious and peaceful, become distorted, angular and violently deconstructed in the ‘Fate of the Animals’. Macke’s somber 1914 painting ‘Farewell’ shows faceless people – in marked contrast to his colorful earlier works.

Rainer Maria Remarque’s ‘Im Westen Nichts Neues’ (‘All Quiet on the Western Front’ – the more disturbing literal translation is “In the West Nothing New”) appeared in 1929, about ten years after the conclusion of World War I. Remarque’s account follows the war as seen through the eyes of an ordinary soldier, conscripted with his classmates, filled at first with the euphoria of battle and comradeship, but soon disillusioned when confronted with the seemingly senseless death of so many compatriots. The few that did survive the carnage would be the “Lost Generation”, unable to fit into ordinary life after the war, never being able to forget the horror they had experienced.

Many avant-garde painters in Berlin, such as Georg Grosz, Max Beckmann and especially Otto Dix, were amongst the most outspoken critics of the war. Dix painted his ‘War’ triptych (Der Krieg), which hangs in the collection of the Galerie Neuer Meister in Dresden, Germany. The central panel, shown here, depicts a completely devastated battlefield – a field of death. The side panels depict departing soldiers on the left side and wounded soldiers returning from the hell of battle on the right; the predella shows fallen soldiers in the trenches. Dix had chosen the triptych form as a reference to the Old Masters of the Gothic age, but their triptychs usually depicted biblical subject matter and were placed on altars in churches. His painting visualized the reality of the horror of war. Other intellectuals and writers, such as Heinrich Mann, the elder brother of Thomas Mann, Kurt Tucholsky, the writer and essayist in Berlin, and the writer Arthur Schnitzler (amongst many others) in Vienna, had been critical of the war from the beginning, but were severely criticized, their various publications were banned and their publishers moved to Switzerland to avoid prosecution. 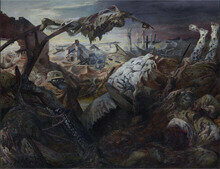 Many great artists lost their lives in the Great War, and for many survivors the War changed their outlooks on life and in turn influenced their artistic endeavors. Kandinsky’s style changed from the early fauve paintings with representative subject matter to purely abstract painting, often with references to music (Improvisation, Composition, etc.). His good friend, Arnold Schönberg also evolved. The ‘Skandal-Konzert’ of Schönberg’s ‘Gurre Lieder’ written by 1911, and first performed by the Vienna Philharmonic Orchestra in 1913 in the Musikverein in Vienna, preceded Schönberg’s ten year silence, after which, he moved towards atonality and the 12-tone system — his 1921 composition ‘Intermezzo – from Piano Suite No. 25’ is a perfect example. A similar relationship between artist and composer can also be seen in the works of Alexej von Jawlensky and Gabriele Münter, who used color as a structural element, and some of the other composers of the ‘Viennese School’, such as Alban Berg and Anton Webern, who used tone colors to form musical variations.

The Great War had left indelible marks on a generation of musicians, artists and writers. The initial intellectualized image of war as a facilitator of internal cultural/political change faded in the face of the reality of carnage and destruction.