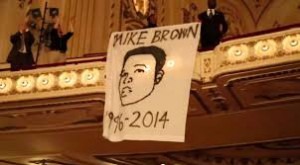 When the St. Louis Symphony Orchestra got ready for a performance of the Brahms Requiem recently, two members of the audience began singing the old civil rights tune, “Which Side are You on?” Other protestors seated on the main floor and in the balcony joined them in harmony. Apparently, the protesters unfurled three hand-painted banners, listing the birth and death date of Michael Brown, the unarmed teenager shot dead by Ferguson police last year. “The five-minute interruption was met with a smattering of applause from some audience members, as well as members of the orchestra and chorus. Others simply watched as the orchestra remained silent.”

Johannes Brahms: A German Requiem, Op. 45 “Ihr habt nun Traurigkeit”
Political protests at classical music events have certainly not been a rarity. This is hardly surprising as Classical music has always been the most political of all art forms. In his last three operas, Mozart provocatively made highly controversial political statements questioning the birthright of the ruling class, while Beethoven was sufficiently annoyed with Napoleon to change the dedication of the Eroica to “the memory of a fallen hero.” Verdi helped to turn Italy into a somewhat unified country, and much of Shostakovich’s music painfully reminds us of Nazi atrocities and Stalinist terror. Yet for some reason we are told that music and politics nowadays ought to be kept separate! As the conductor Kenneth Woods recently wrote, “Classical music, worried about alienating funders and scaring off audiences,” (not to mention insulting oppressive governments) “has completely neutered itself. If we can’t agree that the violent death of an unarmed teenager is a tragedy, what hope do we have?”

On the anniversary of the Tiananmen Square Massacre I was listening to the Hong Kong Philharmonic perform a bit of Mozart and Richard Strauss at the half-empty Hong Kong Cultural Center. All in all, it turned out to be a rather enjoyable and accomplished performance, with Jaap van Zweeden expertly leading his troops through standard musical fare. Rather predictably, Tiananmen did not figure at all! Is it really a surprise to the corporate and artistic leadership of the orchestra that pleasant sounds produced by a good orchestra is simply not enough anymore! The reason classical music is loosing customers and a new generation of listeners has nothing to do with an inferior product or that it requires historical knowledge and some kind of cognitive load. It has to do with loosing relevance and touch with the population it is actually charged to engage. If the exclusive aim is to provide some kind of passive entertainment, Disney World or binge-drinking on weekends will always win. The concert hall has always been a hub for intellectual discussion and a place to share ideas in a respectful and non-disruptive way, and even more importantly, a place to find common ground amongst the differences and diversity that is an essential part of the human condition. Heaven help us if this last bastion of mediation is made to become irrelevant and disappears!