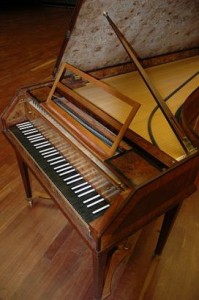 Today I accidentally stumbled over another rarity from the vault of unusual and singular instruments! The instrument in question—variously called “Tangent piano” in English, “Tangentenflügel” in German, “cembalo angelico” in Italian, and “clavecin harmonieux et celeste” in French—sounds like a cross between a harpsichord and a fortepiano. The treble resembles the bright sound from a light action piano, and the bass mimics the bass from a harpsichord. At one point it was the favorite instrument of Wolfgang Amadeus Mozart, who knew it under the name “Spähtsches Klavier,” the maker of the instrument. 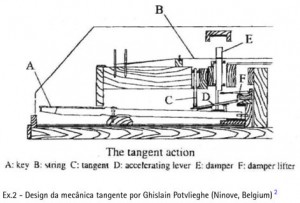 Franz Jakob Späth was an organ builder in the city of Regensburg who became rather famous throughout Europe because of his particular 1751 invention. Resembling a harpsichord and early piano in design, his new instrument had a range of five octaves. However, it uniquely produced sound when the strings were struck by freely moving slips of wood resembling harpsichord jacks rather than hinged or pivoted hammers. The tangent is driven by the player’s finger, striking the string to produce sound. Unlike the clavichord where the tangent remains in contact with the string to keep the note sounding, the tangent in the “Tangentenflügel” rebounds immediately from the string. Essentially providing an escapement, the string is allowed to vibrate freely.

The action of the “Tangentenflügel” included an intermediate lever to increase the velocity with which the jack-striking element is propelled towards the strings. It also included a large assortment of tone-altering devices, including an early damper system and a buff stop. The force with which the keys are struck determined the loudness of the sound. Together with the fortepiano, the tangent piano attempted to remedy the lack of dynamic control in the harpsichord sound. And the variety of sounds this unusual instrument was capable of producing appealed to the changes in classical music, which was looking for more expressiveness and intensity of sound production.

The tangent piano had a short period of popularity, and disappeared somewhere in the late 18th or early 19th century. Although not confirmed, it is possible that Carl Philipp Emanuel Bach’s keyboard concerti were written for this particular instrument. We are certain, however, that the other sons of Johann Sebastian Bach wrote pieces expressly for the tangent piano.