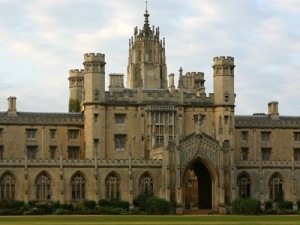 The Mediaeval French motto “souvent me souvient” given to St John’s College by it’s founder Lady Margaret Beaufort is as potent in this Quincentenary year as it was when the College was founded in 1511. Inscribed throughout the College on lintels, gates and pediments it has a three fold meaning, “I often remember”, “think of me often” and, as the homonym souvent me sous vient – “I often pass beneath it”. Whether those academics, students or visitors who pass beneath the inscriptions around the College on a daily basis think of what has passed in the buildings around them, anniversary years are certainly an opportunity to reflect on past achievements.  St John’s College has much to celebrate. With a long history of education, religious activity, learning and research, the College can count amongst its alumni nine Nobel Prize winners, six Prime Ministers, three archbishops, at least two princes and three Saints. In the arts, a roster of writers, poets, playwrights, photographers, musicians, sportsmen and women, and journalists all feature in the leather bound matriculation volumes in the College’s Old Library.


This tradition of innovation at St John’s is nowhere more present than in the College Chapel, where the Choir builds on over a century of musical excellence. A Chapel has existed since 1511 when Lady Margaret founded the College on the site of a thirteenth-century monastic hospital. On it’s present site, artistic endeavour and musical thought have produced one the UK’s consistently strong choirs. The Chapel Choir’s preeminent position in choral singing can be attributed to the six Directors of Music who have been able to develop the Choirs distinctive sound and the unique acoustic of the Chapel. The first significant change to the Choir was Robin Orr’s decision to persuade the three elderly lay-clerks to retire in favours of a number of choral scholars, undergraduates of the University of Cambridge. The make-up of the treble line was also modified, increasing the number of Choristers, which allowed for weekday services to be introduced. Orr changed the Choir into what it resembles today, but it was George Guest’s forty-years at the helm that really propelled the Choir’s musical excellence and established the reputation that the Choir enjoys now. Guest encouraged the visceral, vibrant sound that was unlike any other English choir of the time, and focussed on the words, extracting a nuanced understanding to the benefit of his interpretations. ‘His influence extended beyond [those] who came directly under his tutelage’ wrote Stephen Cleobury on Guest’s death in 2002, ‘to countless others whose lives he enriched by the potency of his musical interpretations’. Guest covered an enormous amount of repertoire (which his extensive discography with the Choir bears witness), including premieres from the leading composers of the day.

When Guest retired in 1991, his successor was Christopher Robinson and what followed was perhaps the most exciting period of the Choir’s history to date. Andrew Nethsingha, the current Director of Music, in a recent article noted that Robinson “immediately latched on to George’s very particular kind of phrasing, the warmth and expressiveness of the Choir, and the rather laid-back nature of the sound”. The Choir continued to excel, and the ten discs of English Choral Music on the Naxos label are probably the finest series of sacred choral music to date, and a testament to Robinson’s success. David Hill, in a short three-year tenure, further added to the Choir’s international profile on tour and on five discs. Like Guest and Robinson, Hill was a distinguished choral trainer, and encouraged the choristers to sing in a free, natural and uninhibited way.

Four concerts will celebrate the College anniversary, along with a year-long organ recital series given by former organ scholars. The Quincentenary projects are the work of Andrew Nethsingha, and draw together present and past members of the musical community at St John’s. The anniversary celebrations will start with a performance of Haydn’s Creation with the Britten Sinfonia in the College Chapel, and repeated in St John’s Smith Square, London. Former Choral Scholar Allan Clayton will join the Choir, along with soloists Rebecca Evans and Neal Davies. The five contemporary composers commissioned for the Quincentenary year are John Rutter, Judith Weir, James MacMillan, Jonathan Harvey (a College alumni) and James Davy. Their works will be premiered across the year: at the Advent Carol Services, Commemoration of Benefactors Service and the May Concert. Also throughout the year are the organ recitals by former Johnian organ scholars, which includes many UK cathedral organists and recitalists. The year will culminate in two further concerts, one in the magnificent Ely Cathedral and the other in the prestigious Royal Festival Hall. The two programmes draw on some of the choral works that the College has been synonymous with, and pieces from composers with whom the College has had long collaborations.

Alongside the special events, the Choir still sings for the daily services in the College Chapel. These are the events that perhaps are the greatest tribute to the history of music in the College, a reminder of the unswerving commitment to choral singing for hundreds of years. Sung with the same passion as the flagship events, as can be heard on the Choir’s weekly webcasts, these Choral Evensongs are the foundation stone OF St John’s rich musical heritage. The sound of the choir reflects the individual voices of the current cohort, yet is hewn from the sound of the past. Nowhere else in the College is the motto “think of me often” more appropriate than in the College Chapel, and it is therefore fitting that the Choir’s musical events are central to the College’s celebrations in this Quincentenary year.

[A full schedule of the Quincentenary events and more information on the Choir of St John’s College can be found at ww.sjcchoir.co.uk.]